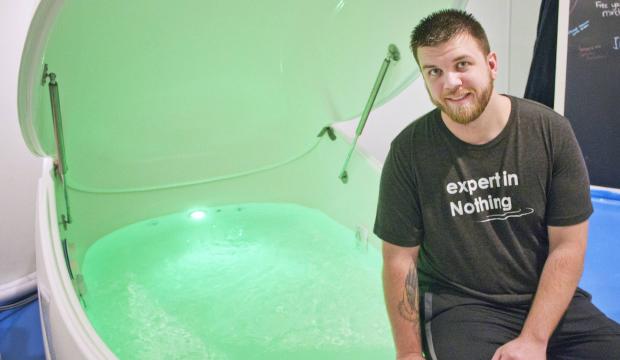 When Casey Campbell left the U.S. Army after eight years — including a year in Iraq and two in South Korea — he felt anxious and depressed, he said.

“I had a hard time adjusting. I couldn’t sleep,” he said. But in 2015 he discovered isolation tanks, also called sensory deprivation tanks or float tanks. The experience, floating in total darkness and silence, immediately changed his life, he said. “I got the best sleep I’d had in months that night. I felt alive, not in the dumps.”

So Campbell decided to bring the experience to Topeka and in January opened Midwest Float, 2120 S.W. Brandywine Lane, Suite 110, a spa with two sensory deprivation tanks for “floaters.”

Float tanks operate on a simple premise: 900 to more than 1,000 pounds of Epsom salt keeps the body buoyant as it floats in the dark, silent pool. The condition deprives the senses in a way that allows most people to relax more fully than meditation or other spa treatments.

The concept may seem odd to newcomers, Campbell said. Total silence and darkness is recommended, but an array of LED colors is available along with music for those who want it. Counting backwards, concentrating on breathing and other meditation tricks help eliminate distractions. Floaters usually become open to the experience by their third session, Campbell said.

“It’s really unlike anything,” he said.