Cosmic sojourners wanted: Ridding my body of toxins and floating my way to nirvana

Cosmic sojourners wanted: Ridding my body of toxins and floating my way to nirvana

Blog » Cosmic sojourners wanted: Ridding my body of toxins and floating my way to nirvana
Posted on September 1, 2015
Tweet 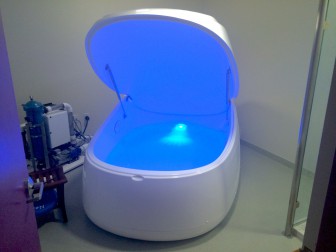 I spent my Sunday morning submerged in a sensory deprivation chamber.

In the August 2015 issue of “Nature’s Pathways,” Welch describes these tanks as follows:

“In a nutshell, the float tank, pod or chamber is a dedicated place to relax. Unlike floating in a swimming pool or lying in bed, several hundred pounds of Epsom salt dissolved in skin-temperature water keeps your body fully supported with no sensation of physical pressure or temperature, no effort and no way you can sink, even if you fall asleep. These factors create a kind of bodiless, ‘floating in space’ experience.”

One of two pods in use at Float Factor.

The tanks are particularly popular with the alternative medicine community, lauded for their meditative and healing effects.

I began this experience with an extremely skeptical view of floatation. After some research, I decided it was little more than alt-medicine baloney, and I harbored quiet suspicions my experience would be underwhelming. My doubt is rooted largely in the eccentricity of the man who invented floatation therapy, John C. Lilly, whose kookiness is properly represented by his wonderfully out-of-date website.

Sitting in the lounge of Float Factor, the serenely smiling bust of Buddha illuminated by no fewer than three quartz crystal lamps reinforced my concerns this would indeed be the new age hocus pocus I had braced myself for.

Welch had clearly prepared for skeptic visitors such as myself. She referenced the medical benefits of floatation including increased circulation and alleviation of joint pressure, citing the recent use of floatation therapy by professional sports teams, such as the New England Patriots.

Her prediction for me was correct: The best way to cure my skepticism was to experience the isolation pod for myself.

Welch led me to another room and handed me two towels, ear plugs and a packet of vaseline. Welch departed, leaving me alone with the tank where I would spend my next hour in total isolation. The pod itself was a classically futuristic design, resembling a larger and wider version of Eve from the movie Wall-E.

I stripped down and stepped into the warm, salty waters of the pod, shutting the lid over my head and closing myself inside this mysterious chamber. 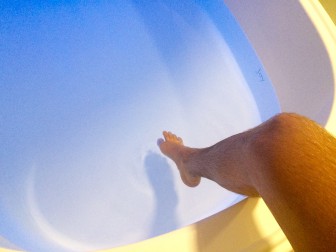 Testing the temperature of my gateway to enlightenment.
AARON HATHAWAY/The Badger Herald

The extreme buoyant force of the water took some getting used to, but after some adjustments I managed to achieve a state of extreme comfort. My spine adapted a comfortable and healthy curvature, my legs and arms spread out and my head bobbed serenely with my ears just below the water.

I switched off the interior lights of the pod, immersing myself in total darkness — there was no difference in vision with my eyes open or closed. I dismissed initial thoughts of claustrophobia and concentrated on a measured breathing exercise Welch had recommended. The exercise ushered me into a phase of mental activity unlike anything I have ever experienced.

Floating in this void, relieved of all sensory stimulation, I became aware of just how much brain power is devoted to subconscious and constant processes: maintaining balance, coordinating movement, processing the sights and sounds of existence. Inside this floatation pod my brain had nothing to process or regulate, save for basic homeostasis, ultimately freeing up a large portion of mental horsepower for other purposes.

For me, this environment was very self-reflective. With no external stimuli to respond to, my mental processes focused entirely on myself. I began analyzing and reflecting upon my dreams, memories and interests — these intangible elements foundational to a personality. My thoughts became intensely visual, and I was able to recall memories or envision imaginary scenarios in remarkable detail. I could perfectly imagine the noises, smells, sensations and sights of these scenes, certainly to a degree I have never done before.

I emerged from this float pod a convert. While I still have my doubts about the grander claims regarding float pods’ abilities (such as curing addiction), I am convinced they can induce beneficial meditation and altered mental states. I felt like my float session temporarily detached me from my body, forcing me to enter a very thoughtful and relaxing world of self-exploration.

As I admitted to Welch afterward, my experience far exceeded what I had expected. She smiled knowingly, the look of someone who has grown used to reactions like mine.

If floatation is for new age, alt-medicine loonies, then buy me a faded Grateful Dead t-shirt (size medium) and a pallet of incense. There’s certainly something to this.

via: THE BADGER HERALD