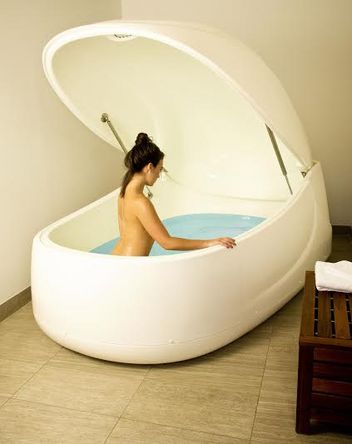 When my acupuncturist, Justine Wenger (you might remember her from my account of what it’s like to get facial acupuncture), first told me about Lift/Next Level Floats, a spa in Brooklyn where you float in dark, gravity-free water tanks filled with 1,000 pounds of Epsom salt, I was…feeling a lot of feelings. But she said floating would help treat my lower back pain—it decompresses and realigns the spine and helps relax back muscles. So I figured, why not? At $99 for a one-hour treatment, it seemed worth a shot.

Upon arriving, I learned there are many various benefits to floating. According to Lift/Next Level Floats’ co-owner Gina Antioco, floating can help reduce stress, cortisol levels (the hormone that’s linked to weight gain), and lower blood pressure. It can also reduce migraines and alleviate insomnia. (When your skin absorbs the Epsom salt, it helps replenish your body’s supply of magnesium, a mineral known to aid sleep and detoxify.)

Also, because you’re literally floating in a concealed water pod with no other stimulation from the outside world, the benefits can be spiritual too. While some clients have reported experiencing hallucinations, for others, Antioco says, “Floating is the perfect opportunity to disconnect from your devices and connect with yourself. A lot of people liken the experience to how they feel after a great vacation.”

So off to a pod I went. It was located in a cavernous tiled space outfitted with a glass-walled shower. I first rinsed my skin and hair generously with Dr. Bronner’s lavender soap, and when I was sufficiently rid of New York pollution, I slid (read: awkwardly flopped in like a porpoise) into the clamshell tank. That’s exactly as it sounds, by the way. It’s an egg-shaped tank with a lid that opens and closes like clamshell.

The experience was customizable, which was nice. If you’re a little claustrophobic, you can keep the lid of the tank open. And if you’re afraid of the dark or want to ease into the complete sensory-deprivation thing, there’s a knob inside the tank that lets you adjust the light to your liking. Just don’t press the button and immediately let go of it. Because you will lose that button forever, and the darkness in the tank is thicker than black velvet.

The water in the tank felt slippery—a bit like Johnson’s baby oil. And the taste, well, it put all the bowls of ramen in the world combined to shame. So avoid accidentally ingesting it at all costs. And most importantly, do not put your hands on your eyes because that will sting. A lot.

But after sorting myself out, I managed to lie mostly motionless, floating nearly gravity-free for an hour. The sensation of being completely weightless was hard to grapple at first. I kept trying to force myself to touch the bottom of the tank but kept bobbing back up like a pool toy. Eventually it became second nature—womblike, if you will.

After emerging from the tank after an hour (an automated Siri-like announcement within the chamber alerted me the session was over), my skin felt softer than it does after my weekly vigorous salt scrub. And my back felt lighter and more pain-free than it had in months. I also felt clear-headed, as if I had just swam hundreds of laps in a pool.

I drank two big bottles of water immediately following, and that night, I fell into the dreamiest sleep I’ve had in recent memory.