We Tried It: Floating | Columbus Monthly

We Tried It: Floating | Columbus Monthly 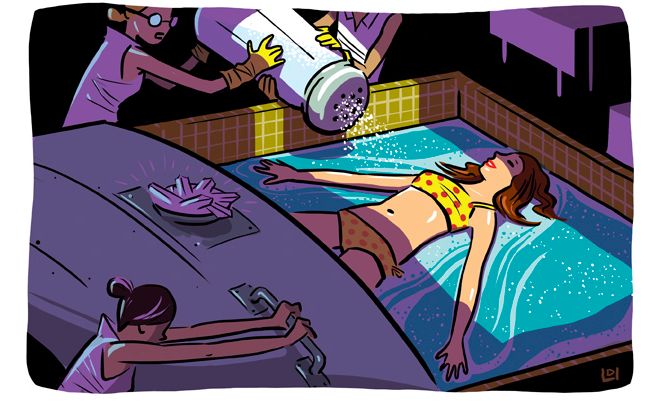 I found a brochure for Reflect Float Center while eating brunch at Portia’s Cafe, among publications and business cards for alternative medicine and yoga. “I’m going to try this for a story,” I told my husband, returning to our table. “It’s called floating.”“Oh, you’re going into a sensory-deprivation tank,” he replied.“No. I’m going floating.”Truth be told, I didn’t like the clinical description of the vessel into which I would climb a few weeks later; I preferred the more Zen connotation of floating.

Whatever you call them, these tanks are filled several inches deep with warm water rich with Epsom salts. The idea is to lie in the water—your body pops to the surface like a cork a la Dead Sea—in complete darkness and bliss out. Muscles, joints, skin and mind reap the reported benefits of this reprieve from gravity and the cacophony of life.Still, the idea of lying in a large metal box for an hour was a bit unsettling. “What’s the worst that could happen?” I asked a lunch companion the day of my float. “If it’s that bad, I’ll just get up and walk out.”

Later that afternoon, floating was so good that I fell asleep in the tank, awakened only when the jets churned into action, signaling an hour had passed.When I arrived for my session, Zedrick Clark, a holistic health coach who opened Reflect several months ago in the Greystone Court Apartments building in the Short North, gave me an orientation that put me completely at ease. Once he left, I locked the door behind him and turned to a tranquil room with a crystal lamp and lots of fluffy towels. After a quick shower, into the tank I stepped, closing the lightweight hatch behind. The blackout darkness was disorienting at first (you can turn on a purple-hued underwater light), but soon it became quite comfortable. My mind raced for what seemed a long time—to every aspect of the tank, errands, work, travel and so on—but at some point, I slipped into semi-consciousness and then unconsciousness, even dreaming for a bit.

For me, floating was the meeting of massage and meditation—I emerged completely relaxed and refreshed. The world outside appeared in high definition, bright and crisp. This leads to one suggestion: Plan your float for a time when you can go home or to another quiet place afterward. I went straight to Target on a Friday afternoon, where the lights and sound proved grating. Having spent an hour in a deeply meditative place, it was unpleasant to return so abruptly to reality.Another pointer: Bring makeup remover and moisturizer. I had to MacGyver some lip balm into removing mascara, and even after a salt-rinsing shower, my skin was too taut for comfort.At Reflect, the first float is buy-one-get-two, since a first-timer spends so much time getting situated. You’d better believe I’ll be back for a second. reflectfloatcenter.com

via We Tried It: Floating | Columbus Monthly.