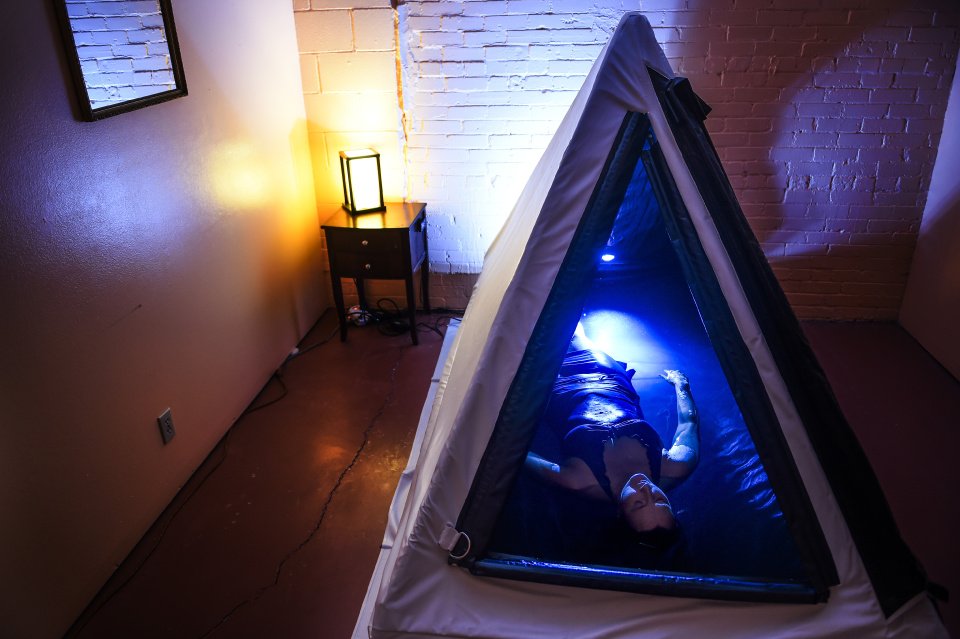 Our fair city is home to its first two flotation tanks, thanks to Kenna Herrmann, owner of IsoFloat in Old Colorado City.

Now some of you, upon hearing the words sensory deprivation tank, might flash back to the 1980 science-fiction/horror film “Altered States.” William Hurt starred as a professor who experimented on himself by taking drugs and floating. That didn’t work out too well for him.

Put that fear-driven association aside. These days, tanks (minus the drugs) are known for providing numerous positive side effects, including pain management, increased creativity, reduced stress and improved athletic performance.

“It’s the weightlessness,” Herrmann said. “When you’re lying in bed at night, there’s pressure on your body. This is zero gravity. You’re separating the body and mind.”

Herrmann discovered floating about a year ago, as she searched for natural ways to ease the pain her father was suffering from pancreatic cancer. She headed to Denver, where several businesses offer the tank experience, and fell in love.

“I was in rush hour afterward, and I didn’t even care,” she said.

Her tanks are filled with 10 inches of water saturated with 800 pounds of Epsom salts – the combination allows the body to float on the surface. It mimics the Dead Sea, she said, a salt lake between Jordan and Israel where people have flocked for ages to experience its buoyancy and health benefits, including relief from anxiety, depression and back problems.

The tank experience can be intense at first, many floaters report. It’s soundproof, light-proof and, after your body adjusts to the 96-degree water, most report not being able to tell where their body ends and the water begins. “You are just alone with your thoughts,” Herrmann said.

Seth Browder spent time in a different sort of flotation tank – one without a cover.

“For people who have never been able to meditate on their own,” he said, “the tanks will push you into a meditative state. It helps you achieve a more spiritual state.”

An academic, John C. Lilly, developed the flotation tank in 1954 after wondering what would happen to the brain when deprived of all sensory input. His results showed people didn’t enter a comatose state, negating one of his theories, but reported feelings of intense relaxation and peace.

The tanks are contraindicated for those with kidney problems, due to the high magnesium content of the water, Herrmann said, and those with fresh tattoos that haven’t healed. Also, those with freshly applied hair dye might want to avoid them.

Even comedian Joe Rogan has experienced the transcendental state of floating. He owns his own tank.

“It will give you a psychedelic experience with no drugs whatsoever,” he said in a YouTube video. “It was the most bizarre physical experience I’ve ever had. You lose this sense of being human. You passed through all physical boundaries and became energy and a part of the universe.”