For the past month I had been living in hyper-energetic New York City. In the past few days I had been feeling frazzled by Twitter and Facebook. And just this morning I was told that my car had been involved in a hit and run. The friend driving it wasn’t hurt but the car was, and now a maze of insurance paperwork awaited me.

I would love to tell you that this was why I agreed to try an hour inside a sensory deprivation tank, sloughing off the petty anxieties of the world, disconnecting from techno-craziness. But really I agreed because the session was free – a gift from Wendy – and it seemed a shame to waste it.

After all, I didn’t consider myself overwhelmed by the hubbub of daily life, despite recent stresses. I was moderate in my social media use. I wasn’t glued to my phone (to the shock of my friends I sometimes left it behind when I walked our dog or worked out at the gym.) I prided myself as someone who could sit for a few minutes and stare into space, a skill that has mostly gone the way of bell bottoms and dialing a rotary phone really, really fast. Did I really need sensory deprivation? It seemed to be for other people, with other problems.

But I like free things, so I walked over to Lift/Next Level Floats (could I trust a company who couldn’t quite decide on a name?), which had opened just the month before. The place was modern and well lit, the woman behind the desk perfunctory. I signed consent forms denying responsibility if I reverted to a simian version of myself, half-crazy, jabbering, unable to tell the difference between my inner reality and the outside world. The forms didn’t actually say this, but I had watched the horror movie Altered States back in the 80’s, and it involved isolation tanks and a mad scientist, and I assumed that these were the dangers, however slight.

I decided against entering one of the “pods”; they resembled white plastic placental sacs, and might trigger my newly discovered claustrophobia. I opted instead for a small room, with a shower, a bench, and an inner area that would serve as the isolation tank. It was about ‘seven feet by five feet, the floor filled with two feet of blue water. This is where I would “float” for the next hour, earplugs in, lights off (I realized quickly that the verb used to describe this whole experience was “to float” and not, as I had first thought “to sensory deprive.”) Other instructions were brief. No “concentrate on your breath.” No “ponder the universe.” Not even “don’t think about anything.” Just “shower first, then be careful that the Epsom salt in the water doesn’t get into your eyes.” I was assured that staying on top of the water would be effortless because of the salt concentration. Did I need a neck pad? That was available too.

I pulled the door to the tank closed. Okay, I confess. It wasn’t all the way closed. I left it open a sliver, letting in a crack of pale grey light. It wasn’t that I was scared of a dark room. But I was nervous about the dark of my own mind. I realized that I dreaded the next hour like I dreaded assigned seating at a dinner party. What if my table companion was boring? What if she was a little crazy?

I lay back and to my surprise, I floated.

Sensory deprivation is not so easy to come by (even if you close the door and avoid the slightly grey light that seeped in from some far off outer room.) As I settled down I bumped up against the sides of the tub. I was aware of the stiffness of my back, the way one foot flopped to one side. Soon, though, I began to relax. My body began to disappear. Okay. This was pretty cool.

But my mind would have none of that. Thoughts began to do belly flops against my skull. Smack! Did I turn off my phone? Smack! Jacked up car insurance rates! Smack! Is this what it’s like to be in a coma? Smack! Am I doing this right? Smack! When will I die? Wasn’t sensory deprivation a Guantanamo torture method? Where the heck am I? Smack! Smack! Smack!

Then there were the thoughts that insisted on describing the experience to me, while I was in it, but in the past tense. “The water was a light blue-green.” “The pods were an option but I opted for a room.” “There were disco LED lights in the ceiling.” It struck me: I was imagining how I would retell this strange experience to other people. Despite the fact there was no phone in my hand, I was already Facebooking, tweeting, and Instagramming my time in the sensory deprivation tank.

I sat up abruptly. Did I even possess an inner self that didn’t undergo some scrubbing and editing for the outside world? Before I could completely process this depressing question, salt ran into my eyes, stinging them. I turned on the light. Sensory overload floaded in. I felt relieved, then a little ashamed. Pain and blinding brightness were more comfortable for me than quiet and darkness; what did that say about me?

Now I was determined to follow this through. I showered the salt from my face, returned to the isolation room and this time closed the door completely. I had a half hour more. I could do anything for a half hour! My body relaxed quickly. Thoughts still ricocheted around my skull, the narration continued. But I followed the yogic course, gently pushing the thoughts aside, trying to concentrate on my breath. Sadly, even this became a story to tell later: “So I lay there, trying not to judge myself, being that mountain they talk about in Buddhism, the one with the weather and stuff.”

I was completely alone, in the dark. I was far from the Internet, with its cute dancing dogs and the controversy about guacamole and peas. Yet my mind continued to snap its version of a selfie, scribbling down my experience for its imagined audience. I wondered (as I floated): Have the mediums we now use for communication burrowed so deep within us that we can only see ourselves from this strange remove? Will we now process everything from the center of a documentary of our making? This was pathetic. This was enlightening.

For a few seconds at a time I did manage to fall into the coveted fugue state promised by sensory deprivation. Then the music came on, signaling that my time was almost up. I left triumphant. I had – if only for a moment – escaped the outer world and some of my inner thoughts. I had also written this article in my head; now I was impatient to leave, get it on paper, and out to the world to you. 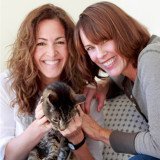