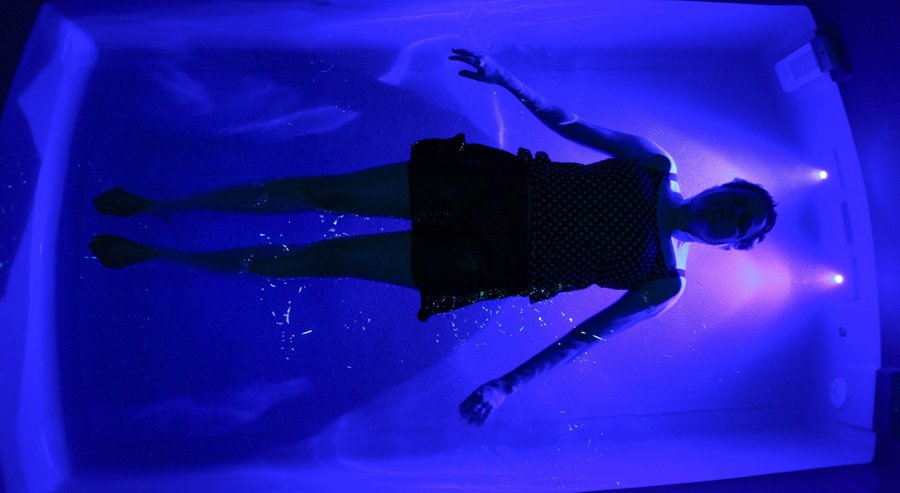 July, oh my. By the time this month comes to its sweaty, stressed-out close, San Diego will have hosted Opening Day at the Del Mar Racetrack, the Major League Baseball All-Star Game, LGBT Pride and Comic-Con. We have been up to our eyeballs in hat-doffing, jersey-sporting, rainbow-sharing, fake-blood spouting guests, and now that our visitors have vamoosed, San Diegans deserve a little Us time.

Everybody into the tank!

With their promise of total escape, flotation tanks seem like a welcome antidote to our month of sensory overload. You can’t unsee the large man in the My Little Pony costume, but some time off the grid might help you send that memory gently on its way. Peace be with you, good sir.

How does floating work, and could it work for you? At the recommendation of a friend, I dropped in on Float North County in Solana Beach for a 90-minute session. Dive in, won’t you?

Floating is done in a sensory deprivation tank, which is built to shut out light and sound. The tank is filled with a smallish amount of body-temperature water and a large portion of Epsom salts. The salt makes your body so buoyant, the water holds you up so your overstressed muscles don’t have to. You can’t sink in a flotation tank (even if you fall asleep), and your face is always out of the water.

The combination of the sensory detox and the weightlessness can put floaters in a peaceful, Zen-like state that people also experience during yoga or meditation. Also, floating fans are big on the healing benefits of the zero-gravity conditions.

“When you lie in the tank, you can’t feel anything,” said Jaquelin Pearson of Cardiff, who started going to Float North County shortly after it opened last year to deal with her chronic neck pain. “When you are out of gravity, your whole body can relax and elongate. I can feel it in my spine.”

While the actual floating part requires no work whatsoever, preparation is required. Most studios have extensive prefloat instructions about everything from eating and shaving to pregnancy and how long you should wait to float after coloring your hair. Make time to look at your studio’s website, preferably a few days before your appointment. As for your mental preparation, don’t sweat it.

“I encourage people not to study too much,” said Float North County owner Glenn Stokoe. “Sometimes the best thing is to keep expectations low. People who are dragged in here by their spouses or friends are often the ones who will end up saying, ‘That was incredible.’”

This is the point in the discussion where someone usually brings up the claustrophobia issue. Thanks to an uncomfortable experience in the early ’80s, I can vouch for the fact that early tanks were small and disturbingly coffin-like. So not relaxing. Fortunately, today’s float studios offer roomy, groovy-looking pods or actual rooms. At Float North County, you can opt for an Ocean Float Room, which has seven-foot ceilings and plenty of space for stretching out and facing your shut-in fears.

Also today’s pods and rooms have easily accessible doors, which you can leave partially open if it makes you feel better. Total darkness and silence are recommended, but you have the option of leaving the lights on and listening to music. And since you are naked in there, you will be relieved to know that the tank water is vigorously filtered (multiple times) and sanitized using UV systems and other nontoxic methods.

After showering and putting in ear plugs, I eased myself into the tank. The water is kept at 93.5 degrees, which is warm enough to be comfortable but not so warm that you feel like a lobster. New-age music played softly in the background as the salt-rich water got down to the business of holding me up. Then it was time to float. In total darkness. By myself. Just me.

So what happened in there? At first, a lot of acclimating. My muscles took awhile to get the off-duty message and totally unclench. My eyes had to adjust to a deep darkness that makes Las Vegas blackout curtains look like tissue paper. And when the music faded out after a few minutes, it was very, very quiet.

Of all the doubts that plague newbie floaters, the one that got me was the time. I meditate regularly, which means I am comfortable with sitting in silence — for a whopping 10 minutes at a time. But what would I do for 90 stimulus-free minutes? Not much, as it turned out. And yet, plenty.

I relished the novel feeling of being completely free of the little aches and pains that come with a 50-something body. I explored the trippy weirdness of not being able to tell whether my eyes were open or closed. I watched in detached amazement as my thoughts drifted by without gaining any traction. There, but not there.

Mostly, I savored the altered reality of being weightless and adrift in space, totally beyond the reach of my own Mission Control. Like Sandra Bullock in “Gravity,” but without the danger. Or George Clooney.

I did not believe floating pros when they told me 90 minutes would pass in no time, but they were right. Suddenly, the music was back, signaling that my session was over. I wobbled out of the tank, showered off the salt and meandered into the lobby for a glass of water and a slow re-entry. I felt relaxed, fuzzy and not inclined to check my phone. There, but not there. In other words, exactly where I needed to be.

“I don’t think people realize what it does to the body to never take a break and never be quiet,” said Pearson, who floats once a week for 2½ hours. “We are not used to being quiet with ourselves. Quiet is really underrated.”

via: The San Diego Union-Tribune