Searching for self in salt water

Searching for self in salt water

Blog » Searching for self in salt water
Posted on September 15, 2015
Tweet 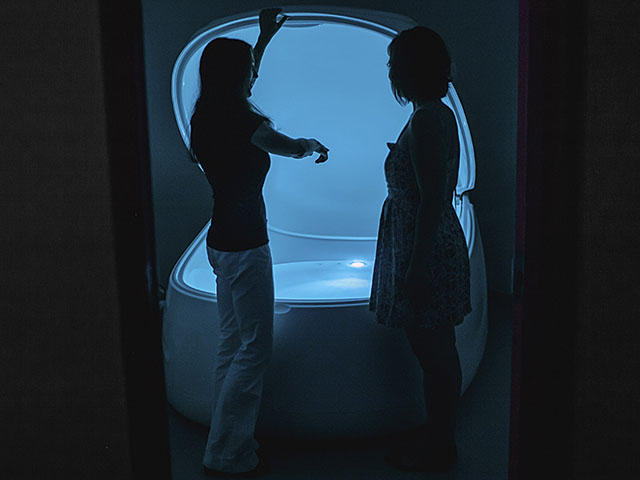 Maria Welch leads me into a soundproof room where a huge, white, egg-shaped pod is waiting.

I’m supposed to get inside this thing, which is emitting a bright blue light from within and is filled with 160 gallons of water and about 1,000 pounds of dissolved Epsom salt, heated to skin temperature, about 94 degrees. The salt bumps up the water’s density to the point at which it can suspend a human body. It’s supposed to be relaxing, euphoric, meditative.

To me, it looks more like a space coffin.

“People go in and they’re not sure,” says Welch, who owns Float Factor on Madison’s west side. “They come out with a big smile.”

The original float pods were isolation tanks developed in the 1950s by John Lilly, a neuropsychiatrist who was studying the effects of sensory deprivation while under the influence of psychedelic drugs like LSD.

There was a float center in Madison on (of course) Williamson Street briefly in the ’90s. Now the movement is seeing a resurgence in popularity in Wisconsin and elsewhere.

In addition to Float Factor on the west side, a business called Float Madison is opening up on East Wilson Street in October.

Floating, as it turns out, is indeed “a thing,” one that costs $79 per hour-long session. But for many it’s worth it — a friend of mine claims that floats have helped him recover from hangovers and jet lag. Welch says before she opened, some of her local customers used to drive hundreds of miles to float centers out of state.

After I sign a waiver, watch an educational video (theta waves, man!) and get a quick briefing from Welch (who assures me I won’t get locked inside), it’s time to strip naked, shower off and take the plunge into roughly 10 inches of warm, salty water. It’s filtered three times between uses and sanitized with UV light.

Once I close the lid behind me, it’s actually not so bad. The pod is surprisingly well-ventilated, and it’s kind of fun to be buoyant. Bathed in blue light and serenaded by New Age pan flute music pumping through underwater speakers, I kind of get the appeal.

Floaters have the option to keep the lights and music on, but in the interest of fearless journalistic exploration into the true sensory deprivation experience, I opt for dark and silent (go big or go home, right?).

In a world constantly illuminated by iPhones and computer screens, the total absence of light is strange. The silence is stranger still; with ears submerged, I can hear the brittle sound of clicking joints and the echo of a churning stomach.

The video warned I might get nauseous. What happens if I barf in the pod? My body is light, but my neck is strangely heavy. I slosh around a bit. I’m pretty sure I’m doing it wrong.

With all outside stimuli removed, the mind is supposed to go blank and drift off into a blissful oblivion. This is perhaps possible for a non-neurotic person (or a veteran floater), but my inner monologue persists.

How long have I been in here? How am I going to write about this? I’m literally doing nothing. Target is across the street; I need some items. I wonder if my cat loves me as much as I love her. Why can’t I keep a man around?

This continues for some time until a woman’s voice tells me my float is over. I’m not sure, but maybe for a moment my snarl of thoughts became white noise, like om, the vibration of the universe. When I emerge, I feel…well, I feel something. That’s for sure. I’m buzzed. I scrape salt out of my ears. The feeling lasts all day.