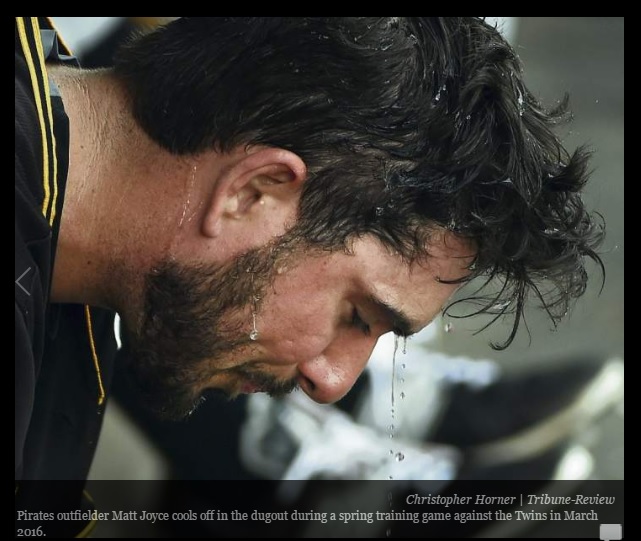 Before every game, Pirates manager Clint Hurdle receives a number — an estimate of every player’s capacity to perform — from the strength and training staffs. The number is part of the decision-making process. The number is not a perfect guide, rather “a talking point,” Pirates head athletic trainer Todd Tomczyk said.

They want to reduce the duration of slumps and lengthen periods of peak performance.

“You start at green, you’re yellow, you’re red.” Tomczyk said. “We are looking for that video-game meter.”

To understand a player’s capacity for performance, the Pirates employ a daily stress test.

“It’s on a very forcefully volunteered basis,” said infielder Cole Figueroa, who was with the Pirates this spring.

The system is called the Omegawave — the company is of the same name — and was developed by Russian and Ukrainian scientists who were influenced by Eastern Europe’s culture of science-based athletic training methods.

The Omegawave is a stress test but a radically different one. Rather than have an athlete breathe into a tube while running on a treadmill for an extended period, the Omegawave tests an athlete at a resting state. The test can be administered daily.

The test takes four minutes. It requires just two sensors attached to the chest and forehead. The technology measures a number of the body’s integral systems, including cardiac, central nervous and energy supply. It gives a reading on everything from mental stress to VO2 Max — how efficiently an athlete uses oxygen.

“This is battle-tested,” Tomczyk said. “It gives us a snapshot of the body as a whole, different systems, to give the player feedback to help them prepare to play.”

“We learn habits. We learn what their body is telling them from their previous night’s work. It’s individualized. It’s giving us a snapshot of what your body can be able to do at that moment. … Do we need to adjust X or Y or add Z to get to optimum performance? Because that’s the bottom line: helping these guys perform at their optimal selves to help Clint and the team win a ball game.”

The Pirates also are using other technology, like the Zephyr BioHarness and Statcast, to track players’ heart rates, movement and energy consumption during games.

The data collection requires trust, but it carries mutual incentive: a more efficient player is a more valuable player, and one who should help the team win more. Tomczyk said the testing has been met with minimal resistance.

“If the player believes it is going to help them perform,” Tomczyk said, “they are all in.”

But what about the idea it could be used against players in how they are evaluated by the club?

“Guys are going to be a little bit on the edge with this, too,” Figueroa said. “Contractual issues — ‘Can they use this against us?’ Arbitration hearings. Guys get really nervous when you start measuring functions, especially brain functions.”

Creating a meter is one challenge. Keeping an athlete at or near 100 percent is another.

Trying to maintain optimum performance is why Pirates closer Mark Melancon often can be found in a dark, pod-like isolation tank, floating on a pool of heated water melded with 1,400 pounds of salt.

Isolation tanks first were used in the 1950s to test sensory deprivation. Now they are employed for relaxation and meditative purposes, including reducing levels of stress hormones.

One 60-minute session costs about $70 at Pittsburgh Float in Shadyside, but the Pirates have their own isolation tank — added this year — in their “regeneration room” at PNC Park. The room is across the hall from the home clubhouse. The space houses the isolation tank, two beds and a handful of recliners.

“It’s like you’re in space. … You just float completely relaxed like you’re in the Dead Sea,” Melancon said of the tank. “It’s dark. You’re floating on top of the water. You’re weightless. It gives you an energy, a rejuvenating energy that doesn’t make you feel groggy, just light on your feet.”

He said he tries to nap in the room 45 minutes before first pitch.

Melancon is willing to experiment with just about anything the Pirates strength and training staff offers. And perhaps it’s no coincidence Melancon has been the most slump-proof Pirate, as evidenced by his MLB-best save percentage of 96.3 over the past two seasons.

Efficiency is why the Pirates are so obsessed with rest.

Players are educated about how “blue light” from cellphones and electronic devices can negatively affect their 24-hour physiological rhythm. The club has sleep experts meet with the players and advise them how to reduce jet lag. Players are advised to wear compression tights on planes to increase blood flow.

In addition, Baseball Prospectus found Pirates starters had played five games or fewer in a week 65 percent of the time last season, while the league average is 59 percent.

“I still have enough people in my life that are as old or older than me and the first thing they say is, ‘(Players) don’t need any rest,’ ” Hurdle said. “And you’re like, ‘Oh come on. Just let it go.’

But not everything that counts can be measured, particularly from the mental side of performance.

While Stewart spoke, flat-screen TVs in the PNC Park clubhouse displayed a running video loop of offensive highlights against that day’s opposing starting pitcher. It’s part of the club’s focus on positive thinking.

Confidence, positive thinking and clarity are more difficult to measure. The Omegawave reveals heightened stress levels, but it will not know the cause and does not provide a remedy.

The Pirates focus on the mental side with their sports psychology or “mental conditioning” staff.

“From my perspective, it just gives you more insight into how you’re feeling,” Stewart said. “It makes you more aware of it. You come in every day and say, ‘I feel good enough.’ But when you sit down and think about it and take a survey on a 1-to-5 basis … it can cause you to create different habits.”

“What that video game (meter) is missing is a huge element,” Tomczyk said. “How do you connect with that human being?”

Pirates sports psychologist Chris Johnson, who worked with Navy Seals and Marines for seven years and spent a year with the Golden State Warriors as their team psychologist in 2014-15, also is available to players.

“(Johnson) talked about snipers and how they have to slow their mind down, their heart rate down,” Stewart said. “It’s about mental attitude, and we’re big on that here. It’s helped me out a ton.”

But does it all work? The Omegawave? The rest focus? The mental conditioning?

It’s difficult to separate and quantify the influence of such practices. But the Pirates beat Fangraphs.com’s preseason win projections each of the past three seasons — by 32 total games, the most in baseball.

The Pirates are 83-58 after the All-Star break the past two seasons to overcome slow starts. Perhaps thanks to more efficient, better rested players, they can do so again.

Travis Sawchik is a Tribune-Review staff writer. Reach him at tsawchik@tribweb.com or via Twitter @Sawchik_Trib.