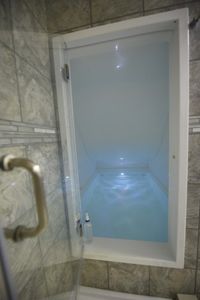 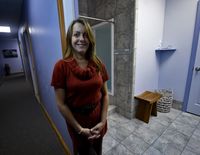 Suspended in perfectly still water the temperature of a tropical sea, the outside world seemed to drift away.

Darkness filled the float tank at Theta Floats, a spa in Franklin. Earplugs kept out ambient noise. Cradled in the 94-degree water, the relaxation experience was immersive.

“You’re in total darkness, total silence,” said Kelly Leal, owner of Theta Floats. “The whole point is to turn your senses off.”

Theta Floats is part of a growing trend in flotation therapy. Customers enter specialized tanks, filled with 10 inches of water mixed with 900 pounds of Epsom salt.

The water is more dense than the Dead Sea, so you float on the top without any effort at all. Without worrying about stimulus outside the body, people can meditate and allow their brain to wander.

Research has shown that the sessions can help reduce pain, eliminate stress, have a positive impact on blood pressure and increase blood flow throughout the body.

“People can treat it like a spa treatment, since who doesn’t want to unplug for 90 minutes, or they can use it for pain relief,” Leal said. 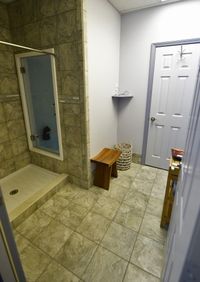 The inside of the float tanks at Theta Spa, a float therapy spa in
Franklin. Customers come in for 60- or 90-minute sensory deprivation
sessions, floating in salty, 94-degree water. Scott Roberson / Daily Journal

Float therapy is based on sensory deprivation, the act of blocking out stimuli from your sight, hearing or touch. The concept of cutting off the senses for greater spiritual and mental clarity dates back thousands of years, but it was a neuroscientist, John C. Lilly, who empirically tested its effect on the brain.

Common belief was that without its senses, the brain would shut down. But Lilly’s experimentation proved that the mind was more active — each side of the brain starts working together better.

He put people in isolation tanks, measuring with electrodes the brain activity. As outside influences such as light or noise were cut out, the brain had a chance to refocus.

“You’re basically pushing the reset button on your brain,” Leal said. “Parts of the brain that didn’t light up before light up after sensory deprivation.”

Float therapy and sensory deprivation was popular in the 1970s and early 1980s, before dropping out of popularity. Only recently has it made a comeback.

In 2014, the industry association Float Tank Solutions reported 56 flotation therapy spas replied to its industry survey. But 156 perspective spas were in the process of opening.

The idea of opening a floating spa in Johnson County came from Leal’s son, who heard about it on a podcast. They went to a spa in Indianapolis to try it, and afterward, Leal was as relaxed as she could remember being.

During the winter, she suffers from insomnia. But the night after floating, she slept soundly for nine hours.

“It was a very healing process for me, mentally and physically,” she said. “When my husband’s alarm went off that morning, I looked at him and told him I wanted to open a business doing this.”

Theta Floats had a soft opening in early July before expanding to its current seven-day-a-week schedule at the end of the month.

The concept is simple. Customers come in, disrobe, wash off in a private shower and enter the floating tank. The water and air at the tank is kept at body temperature, so it’s nearly imperceptible while you float.

After every customer, the water in the tank is cycled through a 50-square-foot cartridge filter system, using ultraviolet light and ozone to ensure sanitation.

In order to operate, the flotation tanks are certified and inspected by the Johnson County Health Department and the Indiana State Board of Health.

Typical appointments last for one hour, but the longest float Leal has had was for three hours.

People can leave on a soothing blue light or play music while they float. But for the full sensory experience, Leal recommends you turn everything off.

“You get the true benefits that way,” she said. “You want your brain to be uninterrupted.”

What: Flotation therapy spa that offers restricted environmental stimulation technique, with benefits ranging from stress relief to help with insomnia to reduction of hypertension.