Naked and floating: Into the darkness of an isolation tank

Naked and floating: Into the darkness of an isolation tank

Blog » Naked and floating: Into the darkness of an isolation tank
Posted on July 10, 2015
Category: Video Tweet 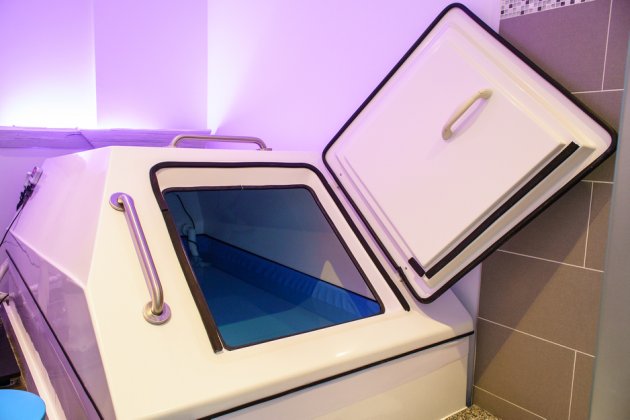 The initial minutes in the first-time isolation tank session are the ones you have to get through. For a “therapy” touted as relaxing and stress reducing, I’m hovering somewhere between alert curiosity and distress. I’m not claustrophobic, but crawling naked into a four-by-eight pitch-black tank filled foot-deep with water and pulling the door shut can threaten to broaden the definition of the word.

In this space, my vivid imagination is not my friend. As the air warms from the 34 degree (Celsius) water, I can imagine the building collapsing around me, leaving me to stew to death in darkness. I lie on my back, buoyed by 850 pounds of dissolved Epsom salt, and I’m suddenly floating in a silent sea at night. My mind goes to the creatures in the miles of water below me, and I wonder if I’ll be cutting my one-hour float appointment short. 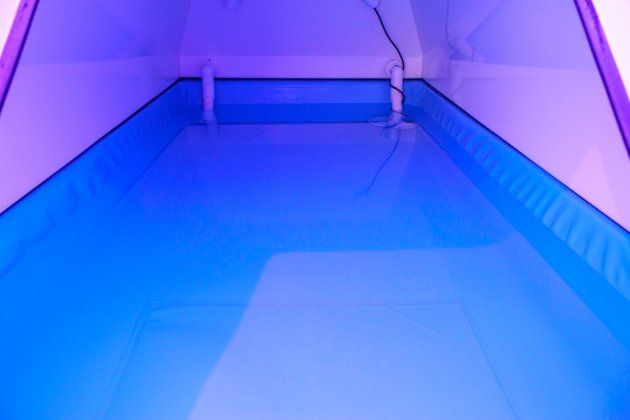 According to the Wall Street Journal, the number has tripled in the U.S. since 2011, and guys like Tom Brady and Joe Rogan are behind it, with Rogan pumping floats as a window to mental development and “introspective psychedelic” experiences.

There are a few ‘don’ts’ attached the isolation tank experience: don’t drink coffee beforehand (stimulants like caffeine reduce the chances of relaxation), don’t shave on the day (salt in open pores = ouch). And don’t go in if you’ve just dyed your hair. Clear on all three, though my mind runs to my fresh sunburn. Should I have mentioned this? Will my experience provide an addition to the list?

At $65 for a one-hour session, floating isn’t cheap, but you can see where the money’s going. The tanks are in private rooms equipped with shower, towels, bathrobe, and soft lighting. Spa touches include separate body washes for before and after. There’s even an apple cider ear rinse. I’ll take in on faith that apple cider is an appropriate substance to squirt in my ears.

I’m told that soft music will play when my time expires, so there’s no need to worry about falling asleep (and the buoyancy of the salt means drowning isn’t a concern even if I do have a snooze). Earplugs come in either foam or wax. I choose foam, because putting wax in my ears feels like it could cause more problems than it could solve.

The water is kept around body temperature, which makes the step-in easy, but quickly raises the air temperature when the door closes.

And the door: a white rectangle with a handle that you pull shut like a scene in pick-your-astronaut-movie. I’m hearing ‘God Speed John Glenn’ as I’m sealed in.

I lie back and debate about whether to keep my eyes open or shut. I feel like I’m sweating, but it’s hard to tell with the slippery coating from the salt water. The buoyancy keeps my face clear, and the sunburn isn’t a problem, but I’m noticing the kink in my neck from a bad sleep the other night. A few minutes in and I’m not feeling the relaxation.

“You’re just kind of getting your bearings and almost just figuring out what the experience is like, even just what it feels like to float without gravity, which position is comfortable,” he says.

“Sometimes it takes people 5 times before they have their breakthrough float.”

The research on floating so far shows that the removal of stimuli in the float tank can lower stress, while improving blood flow and even releasing endorphins.

“You’re having your stress hormones plummeting, your cortisone levels and things like that, because there’s no external stimulus that’s making your brain react to anything,” says Ratner-Decle.

A few minutes in, I pull a rookie mistake and sit up to test the door (Apollo astronauts call it emergency egress), and salt water from my hair runs into my eyes. I fumble for the washcloth and spray solution they’ve helpfully placed on a stool by the tank. It works, and I settle back in to go through with it, for better or worse.

With earplugs in, the dominant sound is my breathing, loud at first, but then quieting as I begin to relax, and soon eclipsed by the sound of my heart, which is surprisingly soothing. Only the barely audible rumble of the Queen streetcar (which probably shows up on seismographs) violates the tank.

For maybe 20 minutes, I’m conscious of my surroundings. My neck still aches, and I’m fighting to get comfortable. I push softly against one wall and float to the other. I listen to my stomach growl. I wait for the music.

But then there’s a shift, and at some point I’m not feeling my neck anymore. My breathing has gone down and I no longer push against the wall. In fact, I don’t want to do anything. I can barely feel my arms, and no longer notice the sound of my heart. It’s not the 2001 Star Gate, but my thoughts are vivid. It’s not floating in space; it’s a nowhere, but to me it doesn’t feel close to sleep. When the music comes, I’m disappointed it’s over.

I get out, take a shot of ear cider, and step into the shower. The tank roars to life as the water recycles for the next person.