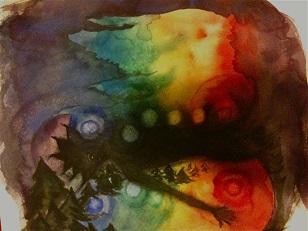 I had been working in IT for about 5 years and was absolutely sick of it. I would listen to podcasts throughout most of my day to stay sane. One of those podcasts was The Joe Rogan Experience. Joe Rogan would talk about this sound and light isolated “float tank” he owned that was filled with salt water. It sounded amazing and the introspection that he got out of his experiences sounded like something I wanted for myself.

I looked online to see if there was anywhere in Portland that had a sensory deprivation tank. I found one gentleman named Chris who had a float tank in his home. He let people float in his tank for a small sum of cash, so I called him and booked an appointment. When I told Sandra about getting naked into a float tank all by myself in someone else’s apartment, she basically told me that it wouldn’t be happening. I cancelled my appointment.

What seemed like just a few weeks later (it may have been months now that I think back on it) Sandra surprised me with several Groupons for floats at an official float center called Float On. We scheduled our appointments and took the plunge. I’ll save you from the story of my first float, as it was actually not very special. In fact, it was actually largely disappointing. “Well” I thought to myself “that was a lot of hype” and was done with it. What I hadn’t realized was that Sandra had bought about a dozen Groupons and really wanted to try it again. Eventually she convinced me to go in for a second attempt, and that float changed my life forever.
Sandra Art small

A painting Sandra made after her second float.

Going in I knew what to expect. I knew what it felt like to float on top of water. I knew what it was like to be still for 90 minutes. I knew it wouldn’t be completely silent as I would hear my own heartbeat and breathing. I knew what to expect. I knew not to expect anything. However it was that lack of expectation that completely changed what my second float would become. I got comfortable quickly. My mind stilled. My mind then opened. Soft reds covered my vision (or lack of vision) and a deep jungle green took over my consciousness. I saw myself from a third person perspective and who I saw was a very bright soul. I saw a young man who emanated warm and positive vibes, and exuded self confidence. The best part was that I was seeing how other people saw me, without my ego coloring my perception. I liked the person that I saw. It was this moment that I found and still find monumentally powerful. You see, for most of my life I have been very critical of myself, always viewing myself as a glass half empty rather than half full. For the first time, I was able to see myself without being chained to my self. It was a gift given to me in the float tank that continues to affect me to this day.