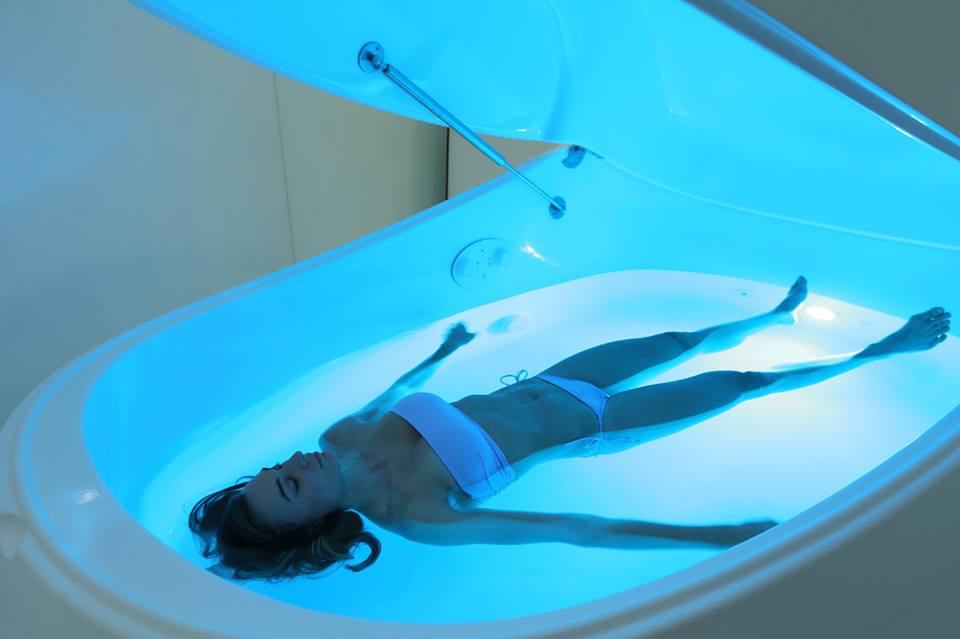 In 2013 James Harder and his wife, Amy Harder, hiked the Appalachian Trail. It goes without saying that this is a demanding process, one that requires a great deal of discipline. After countless meals of camp food, night after night of sleeping on the ground, no shower, no bathroom, none of the creature comforts we tend to take for granted, it’s easy to imagine the many indulgences one might desire upon returning. Like a burger. Or a real bed. Or, I don’t know, walking around without a backpack. But what both Amy and James Harder wanted more than anything was, according to James, “to find a place to float.”

Yes, float. In floating pools. Or pods. Or tanks, depending on the idiom you prefer. And at the time when James and Amy wanted nothing more than to float, they found, to their disappointment, that there are no floating pools in Portland. So they’re opening their own—Float Harder Relaxation Center—in early March, on 500 Washington Ave.

Now, if you’re like me and have no idea what a floating pool is, allow me to explain. Or, rather, allow me to allow James to explain: “Float tanks were invented in 1954,” James said, “by John C. Lilly, at the National Institute of Mental Health. His basic premise was that if you take away all stimulation from the brain, does the brain go to sleep? That’s what he wanted to find out, so he developed a float tank.”

The tank itself is filled with medical grade Epsom salt that, once dissolved, makes “it possible to float effortlessly on the surface of the water, relieving your body of the stress of gravity. The water and the air in the pod are heated to the same temperature as your skin, making it relaxing and comfortable.” And when you pull the lid to the float pod down, the space inside is more or less completely dark. Add to this the earplugs and you have something approximating complete sensory deprivation, which is, of course, the whole point.

But the brain doesn’t fall asleep. Well, not in the ways that John C. Lilly thought it might. What happens, however, is that after a short period in the pool, you enter into the “theta brain-wave state, which is similar to that very relaxed point just before falling asleep,” said James. “Or the brain wave state achieved through deep meditation.” This kind of deep relaxation, according to many, has a number of positive effects: It fosters the body’s ability to recover from muscle injury, “reduces cortisol production, heart rate, and blood pressure, and aids in mental clarity and stress reduction.” But, according to James, it’s also a great way to get into a meditative state. He says that for a lot of people, seated meditation is pretty difficult. “The distraction of the outside world, every noise you hear, or even your own body…but inside the float tank, when you’re suspended effortlessly floating on the water, you really don’t have any sense of your own body, so you’re able get into that meditative zone a lot easier without all the physical and auditory and visual distractions.”

Both James and Amy are Mainers, but when James was in the military, they lived and traveled all over the world. After a stint in Germany, they came back to the U.S. and moved to Denver, Colorado, where they discovered floating. “There was one place in Denver that had two float tanks,” James recalls. “And now, just a few years later, there’s close to thirty float tanks in the state of Colorado at commercial float centers.” This expansion isn’t just a Colorado phenomenon, either. As the benefits of floating are becoming more widely recognized, and particularly as professional athletes continue to endorse many of these benefits, floating is becoming a widespread means of relaxation and muscle therapy. “In 2011,” James said, “there were about 80 float centers in the United States. And now it’s pushing 300. It’s really been expanding and people seem to love it all over the country and all over the world.”

Maine, however, is a little late on the scene. Not only will Float Harder Relaxation Center be the first commercial float center in Portland, it will also be the first commercial float center in all of Maine, and though it is not quite finished, James expanded a little on what the interior will look like: “It’s going to be a comfortable spa environment, with a lounge and couches and chairs, with a little tea-corner.” Each float room is private, with a shower and a personal float pod.

And some people like to float more than regularly: James, for one, “intends to use it every single day. Start my day floating and from time to time probably even end my day floating. It’s just a great way to relax and center yourself.”

via: the Portland Phoenix