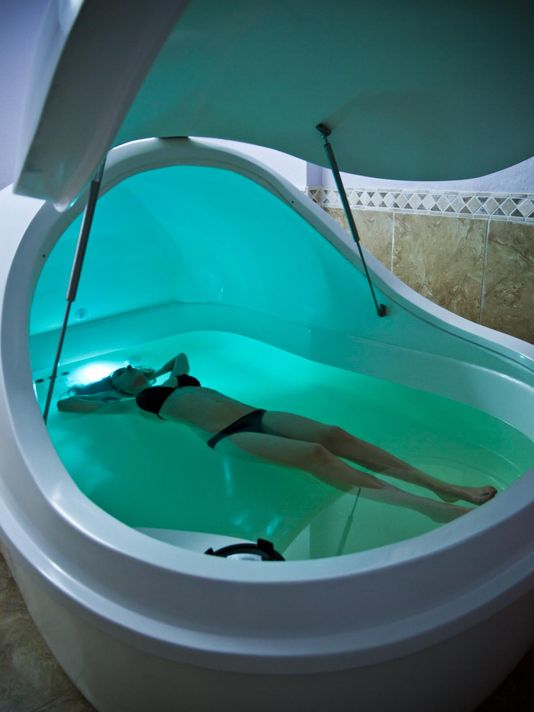 The sensory deprivation tank tantalized me when I first saw the film “Altered States” in 1980.

In the film, William Hurt, a brainiac scientist, is convinced that different states of consciousness — sleep, dreaming, mental illness — are just as real as the “normal” waking state. He tries to access those states by floating in the tank’s dark silence after ingesting psychedelic mushrooms. He then discovers a wormhole to the infinite catalog of human experience. That wormhole was in his mind.

It’s trippy. “Altered States” is over-the-top science fiction, but the philosophy behind it isn’t that far out.

The point of meditation, mindfulness and yoga practices is to Know Thyself. In each practice, the student pushes consciousness to a single point of concentration by controlling the senses. The student may stare at a candle, chant “Om” or connect with the breath to banish distraction. Once there is contact with that object, the mind becomes one with it and will naturally move into what yogis call Samadhi.

Samadhi is a state when the ego, the sense of individual self, vanishes and is replaced by a union, a oneness, with all that is.

I’ve been practicing yoga for 10 years and meditating daily for four. Although I’ve experienced flashes of serenity, connection and unity in different situations, there’s been no Samadhi for me. My senses are wild horses, and, most of the time, I’m dragged along for the bumpy ride.

Perhaps the tank would help, and I discovered one in Bonita Springs.

Contrary to the sensory deprivation tank’s mind-altering allure, at the Float and Flourish Center, the floating experience is a healing modality. And no drugs are allowed.

According to Guillermo Fernandez, the center’s director, more than 50 percent of his “floaters” float to alleviate pain. The water in the tank is loaded with Epsom salt which not only lifts the body to weightless buoyancy, but decreases inflammation and soothes aching joints and muscles.

Guillermo smiled and said that I would have the experience I needed.

Visually, the tank was nothing like the “Altered States” drab can. This was a clam-shaped white pod with a hydraulic lid and a single underwater lamp that bathed the tiled room in blue light. I slipped orange foam plugs into my ears, stepped into the water heated to skin temperature around 93 degrees and sat down. I could feel the Epsom salt tingling raw spots on my skin.

I lowered the lid, leaving about two inches for breathing room. Guillermo suggested that I prop the pod lid slightly open because the humidity was going to build once I was inside. I switched off the interior light and the ambient music and lay back in 10 inches of water. I immediately floated to the surface.

Peering through the two open inches under the lid, I could see a tiny sliver of light around the door frame across the room. Like a stray mark on a chalk board, it consumed my attention. I reached up and slammed the pod lid closed.

I couldn’t sense where my skin ended and the water began. Gravity was gone, and, since I was naked, there was no pressure on my body. I could only hear the sound of my own breathing, so I attempted to surrender to it. But the wild horses started running. I was thinking about my to-do list, dinner, pending appointments, anything. And when those to-do tasks ran out, I pushed against the walls of the pod with my fingertips, propelling my body side to side, riding satisfying waves.

John C. Lilly, author of “The Deep Self,” noted that the tank could elucidate the difference between experience and “inperience.” Can’t I be still with just myself and enter the wormhole of my mind?

A week later, I returned to Float and Flourish because I was tired, fresh off a business trip. I remembered what Guillermo said about the center’s mission — “People come here to relax.”

I lay back into the water’s familiar terrain and closed the lid tight. I listened to the sound of my breathing as the waves settled to gentle ripples and finally to stillness.

I can’t be certain if I fell asleep, but I thought I was dreaming or maybe hallucinating.

My body was floating in space, yet I was invisible. My only awareness of self was spatial, and, as I floated, the outline of my form stretched and morphed into new nebulous curves that took up the entire carpet of the universe. My body wrapped itself around the lifts and drops of all the empty space and rode them like roller coasters, changing and undulating. I became infinity.

Suddenly, Guillermo’s voice boomed in the pod to tell me the session was over. It had already been 60 minutes. Inside the tank, the water was rocking, and I felt as though I had melted, like an oil slick coating the surface and every molecule of the warm saltwater depth.

Nancy B. Loughlin is a Florida writer and yogi. Visit her website www.NamasteNancy.com or follow her on Twitter @NancyLoughlin. Her book, Running Is Yoga, will be available later this year.