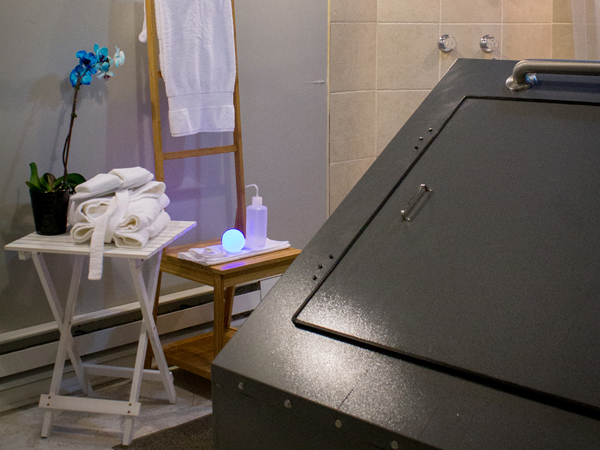 People are constantly looking for new ways to deal with stress. Philly native Keri Rakickas found one when she discovered floating — and much more.

How does floating work? At Halcyon, you’re lowered into water laden with Epsom salts in one of two darkened isolation tanks, and you stay there for 90 minutes. The air and water are kept at skin temperature, creating a sensation that, according to a Halcyon news release, “creates a sensation that makes it nearly impossible to tell where the body ends and the water begins. Soundproofing and complete darkness also amplify the experience of sensory deprivation.”

“Floating is a great answer for those who are looking for a simple way to improve their well-being,” says Rakickas. “It’s straightforward. It doesn’t involve any work, aside from just letting go.”

And perhaps therein lies the secret to this form of therapy. When Rakickas talks about isolation tanks, she’s not kidding. No TVs, no cell phones, no email — just you, alone with your thoughts for the entire session. Sounds appealing, right? Try doing anything without distraction for 90 minutes.

Rakickas was struggling with anxiety and insomnia in her own life, and was near her wit’s end. She wanted to find a holistic means of achieving relief, so she tried floating, despite some initial apprehension.

“I was worried about hallucinations,” she admitted. “But I tried it once, and realized this was like a reset button. I’m not looking for a psychedelic experience, although some people do describe that happening while floating. It sounds corny, but I just go in there to get back to the person I’m supposed to be.”

She got there quickly. “It took me a few sessions to learn to let go, but the after effects of my very first time were immediate,” she says. “The night of my first float, I had the best night’s sleep of my life. I woke up feeling like a new person.”

It worked so well that she began saving for her own tank—until she realized she could take it a step further. “Why not save to open my own float business,” she asked herself.

Rakickas has welcomed customers from far and wide to her float center, the first of its kind in many years in Philadelphia. “My very first day of business, I had a couple drive up from Baltimore,” she says. “I’ve had clients from Chicago, Virginia, Florida — we even had a couple who made it a point to float at our shop during their visit from Brazil!” Halcyon Floats has done well enough that Rakickas is planning to open a second location later this summer at 6068 Ridge Avenue in Roxborough.

Floating sessions begin with a brief shower. There are no guidelines, but users generally enter the isolation tank without clothing. Once inside, the water supports every inch and every ounce of your body, which some experienced users equate to a feeling of weightlessness.

Rakickas says floating can be used to treat stress or jet lag, or simply for pain relief. But perhaps more than anything, it’s beneficial to people who just need a break.

“I float every week —and I’d do it more often if my tanks were available.” she admits. “Luckily, they are usually occupied by my awesome customers!”