Is sensory deprivation the key to relaxation? My test in a float tank

Is sensory deprivation the key to relaxation? My test in a float tank

Blog » Is sensory deprivation the key to relaxation? My test in a float tank
Posted on October 1, 2015
Category: Video Tweet

A few months ago, a mysterious new business opened in my neighborhood: a “flotation therapy center” offering one-hour sessions in sensory deprivation tanks.

“Aren’t you curious?” beckoned the sandwich board from the sidewalk, as did the eerie blue light that glowed from the second-story windows.

“Sensory deprivation” didn’t exactly sound appealing — isn’t that, um, a very classic torture technique? — but these isolation chambers were being advertised as portals to calm and relaxation. “The guy told me it’s like meditating for years,” one friend said after taking a tour. “It’s wild!” texted another, sending me a picture of a space-age looking pod.

A shortcut to meditation that looked straight out of the Matrix? Obviously, I booked a visit.

I didn’t know what to expect when I climbed the flight of stairs above a rowdy German beer hall and opened the door into Brooklyn’s LIFT/Next Level Floats, but I was immediately struck by how good everything smelled. “This place smells really good,” I said, at least three times.

The atmosphere was very Zen and spa-like — I was welcomed into a neutral-toned relaxation lounge with tea and comfortable couches, and shown the various float tank options. There’s the classic “Evolution Float Pod” with a clamshell lid and the “Ocean Float Room,” a more spacious chamber with a ceiling full of “stars” (a classy version of the glow-in-the-dark stickers I plastered above my childhood bed) for those worried about feeling shut in. 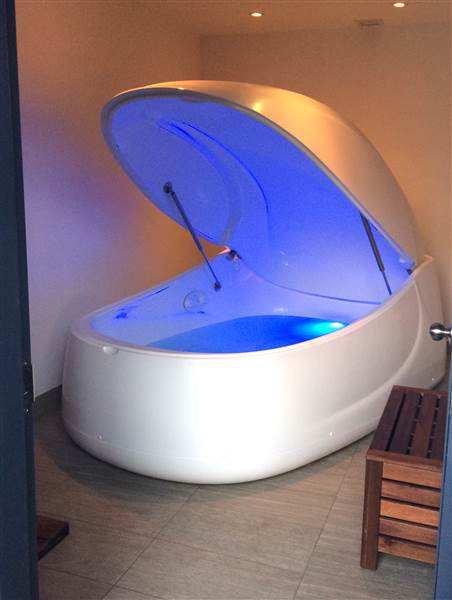 Most people I’ve talked to about floating worry they’ll feel claustrophobic — and I get it; I mean, I remember “I Still Know What You Did Last Summer,” where that girl goes for a tanning session and the serial killer zip-ties her into a pod and she roasts alive. But, the minuscule odds of that happening aside, I found nothing claustrophobic about being in a float tank.

In fact, almost everything I thought about floating turned out to be wrong.

First, a gentle-voiced staffer walked me through the basics: The tank is only filled with about 10 inches of water, which is kept at the temperature of your skin so you don’t feel the difference between yourself and the water. It’s saturated with 1000 pounds of Epsom salt to make you buoyant, like an artificial version of the Dead Sea. While you can listen to music in the tank (they pipe in a very New Age soundtrack), they recommend you go full sensory deprivation, turning the lights off, closing your eyes, and donning ear plugs to block out any noise (and keep the salt out of your ears). 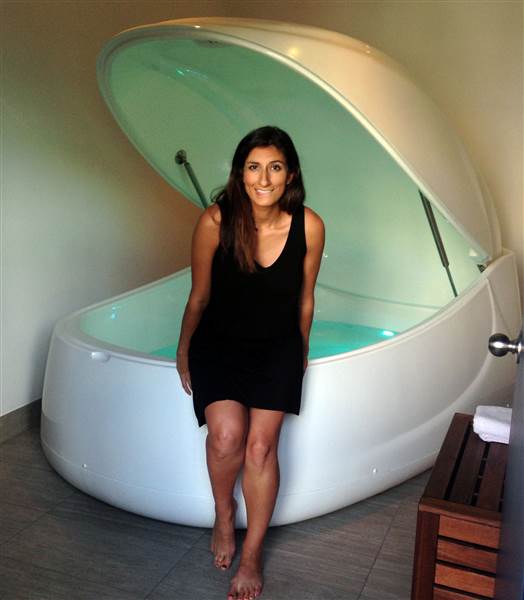 I was a little nervous, but once I climbed in the pod felt surprisingly big. Even when I pulled the lid closed, there was plenty of room above me and to my sides. Lying on my back, I could stretch out completely and not touch the tank.

The water, lukewarm to the touch, was very comfortable — it felt like sitting in a bathtub for a long time where you stop noticing the temperature. A large button inside the tank controlled the lights, so when I hit it, the tank dimmed to complete darkness. This wasn’t creepy at all, it was more like that moment on an airplane when they dim the lights so everyone can go to sleep. Then, a very wise-sounding woman came over the speaker inside the pod, telling me to enjoy my float…Continue Reading…