I Tried It: Floating as Meditation | Daniela Andrews

I Tried It: Floating as Meditation | Daniela Andrews

Blog » I Tried It: Floating as Meditation | Daniela Andrews
Posted on April 14, 2015
Tweet 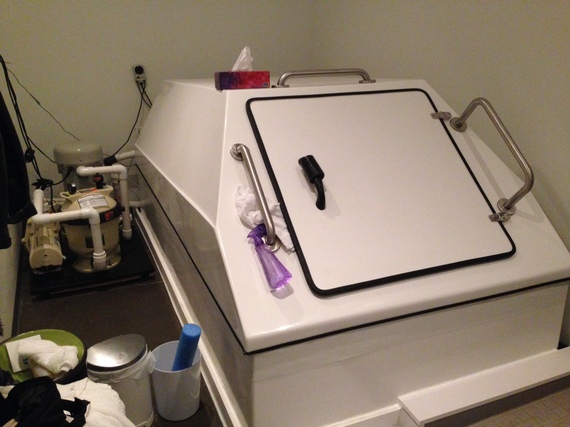 The first thing that pops into my head when I enter the float room at Float Toronto is, “will anyone notice if I sneak out?” In front of me the actual flotation tank, an 8′ x 4′ x 4′ fiberglass contraption with a big trap door and a tangle of pipes and wires protruding from the furthest end, looms large. The whole thing is a little creepy, and slightly reminiscent of a submarine scene from 20,000 Leagues Under the Sea. I haven’t even been in the building five minutes and already I’m ready to bolt. But I don’t. I’m sticking this out. Float tanks are popping up across the country with people raving about their meditative effects, so they can’t be that bad. And besides, it’s not going to kill me. Will it?
Floating is a form of sensory deprivation, developed in 1954 by Dr. John C. Lilly, in partnership with the National Institute of Mental Health. Dr. Lilly was interested in studying the origin of consciousness and its relation to the brain, but through experiments (both his and others), scientists discovered that the float tank could induce a relaxed state, which was (surprisingly) not unpleasant, and in fact, quite healing.

The original design for the tank (known as the Lilly tank) had subjects upright and fully immersed in water, with a full-face mask to facilitate breathing. Today, tanks have evolved to allow the user to float horizontally in a lightproof, soundproof tank, buoyed by a solution of water and a high concentration of Epsom salts.

When practiced over long periods of time, this type of sensory deprivation can result in extreme anxiety, hallucinations, and depression. However, as Lilly and his peers discovered in early experiments, short-term sessions can produce feelings of relaxation and a meditative state. Lucky for me, my session is only booked for an hour.

Before I begin my float, I run through a list of questions with Sean Lavery, one of the co-founders of Float Toronto (the other is partner Jesse Ratner-Decle).

Can I fall asleep and drown?
Apparently not. While many people fall asleep, if you were to turn over, the stinging of the salt water in your eyes, nose, and mouth would wake you immediately.

How often are the tanks cleaned?
The water is fully filtered three to five times between each float, via an intense filtration system and a UV filter. The Epsom salt solution also has natural sanitary properties.

What should I do to prepare?
Avoid caffeine the day of your float and don’t shave within 24 hours.

What’s the longest anyone has floated?
An endurance athlete in Portland apparently floated for the better part of 24 hours, but that seems pretty extreme. The longest Sean has gone is three hours.

Why do people float?
It’s the closest you can get to a feeling of weightlessness. Without gravity working against you, all your joints decompress, alleviating aches and pains. It’s also been shown to improve circulation and lower cortisol.

Less stress? Yes please. I’m now ready to jump in with both feet, so to speak. I follow Sean’s directions, and rinse off in the shower provided in the private room. Next, I dim the lights (so that I’m not overwhelmed when I emerge from total darkness an hour later). I insert my ear plugs, and finally, it’s time to enter the tank.

I can hear my heart hammering in my ears, but I steel myself, take a deep breath, and haul open the door. I dip a toe into the water. It’s neither hot, nor cold, and I’m slightly disappointed, having expected something approximating a warm bath, but the temperature of the water is a precise 34.1 degrees, also known as “skin-receptor neutral” where you lose track of where your body ends and the water begins.

I kneel down and, after a few more deep breaths, I make my first attempt at shutting the door. As soon as the darkness hits, I panic and shove the door open, desperate for the dim light of the room. “Don’t be scared, you can do this!” My logical brain is delivering the pep talk, but my animal brain is fixating on the tight confines of the space. I’m not prepared to quit though, so I try again.

I shut the door and I’m immediately submerged in the dark. The darkest of dark. Can’t-see-your-hand-in-front-of-your-face dark. I maneuver myself onto my back and I’m buoyed by the ten inches of water and 850 pounds of dissolved Epsom salt. The air is thick and warm, and at first, I find it hard to breathe, but as I start to adjust to the sensations in the tank, I calm down, and my breathing returns to its natural rhythm.

I spend most of my time in the tank lying in an aquatic savasana, legs and arms down by my sides. I experiment with placing my hands behind my head, like an aquatic version of an afternoon siesta in a hammock. At some point I clearly overcome my anxiety and fall asleep, waking when my muscle twitch jostles the water, sending a round of small waves.

There’s no sense of time in the tank. It’s impossible to gauge whether I’ve been in for 10 minutes or 50 minutes, and, although I skipped my daily cappuccino, as per the pre-float recommendations, I think my mid-afternoon moment of weakness involving a hot chocolate might be kicking in. I’m restless, which seems somehow antithetical to the serenity and calm I’m supposed to be feeling.

More time passes and eventually, soft music fades in, signaling the end of my float. Despite my moments of restlessness, I emerge from the tank with an overall feeling of peace and calm. I wonder for a moment, what it would be like to float to music the entire time in the tank, letting the ethereal sounds of Bon Iver transport me on his musical soundwaves, but Sean says that would defeat the sensory deprivation element. Too bad.

So with the experiment over and done with, would I do it again? Never say never. Although I had a few moments of panic and anxiety in the dark space, the overall effect was definitely meditative and pretty interesting. In a world where we seem to crave activities and solutions that help us disconnect from the constant bombardment of information and technology, 60 minutes with nothing on the agenda seems like a wet dream.

Interested in trying this out for yourself? Float centres have popped up across the country in cities like Vancouver, Toronto, London, Winnipeg, Calgary, and Montreal. Google to find one near you.

via I Tried It: Floating as Meditation | Daniela Andrews.