I Floated In A Sensory Deprivation Tank At Lift Floats In NYC For An Hour; Here’s What Happened

I Floated In A Sensory Deprivation Tank At Lift Floats In NYC For An Hour; Here’s What Happened

Blog » I Floated In A Sensory Deprivation Tank At Lift Floats In NYC For An Hour; Here’s What Happened
Posted on September 23, 2015
Tweet 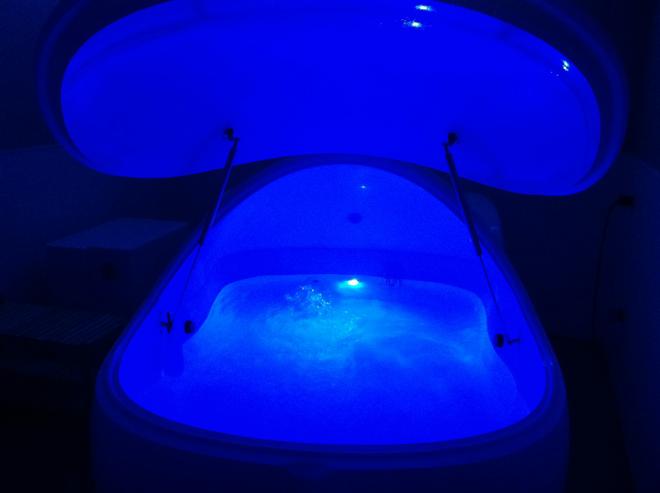 Instead of being submerged, patrons float in a heated Epsom salt bath, which simulates both weightlessness and sensory deprivation. Still, many claims about the benefits of floating in these tanks have remained constant. Celebrities, like Joe Rogan, have attributed complete psychological transformations to this relatively new meditation technique. Others claim it boosts creativity. As someone who is generally skeptical of everything, I thought it was only right that I try it out for myself.

When I walked into Lift: Next Level Floats in Brooklyn, N.Y., I was immediately greeted with the relaxing smells of essential oils. Large windows flooded the room with natural light and I was encouraged to sit on the spa’s comfortable couch while I waited for session to start. After a brief orientation with the tank, which looked more like a weirdly shaped clam shell, I got ready to start floating.

As soon as I closed the lid and the lights dimmed, a calming female voice came on to give me instructions on how to float and further introduced me to the pod. The voice faded away and there was a moment of complete silence that was soon interrupted by the slushing of my heartbeat. It sounded like a muffled version of someone walking through a snowy field, and would serve as the background music for the rest of my float.

I tried to relax over the next few minutes but my brain wasn’t having it. My mind was racing and my body seemed to be out of place, almost alien. Floating in body-temperature water in complete darkness threw off my internal equilibrium, and I could not make sense of my movement relative to the sides of the tank. I spent most of my float bracing myself to float into the wall.

Despite these initial setbacks, I was finally able to relax a little. There were a couple of times that I felt myself slip into a deep relaxation, similar to the moment right before you fall asleep. It’s that feeling when your breathing becomes somewhat shallow, your body becomes stiff, and the only sounds you hear are muffled. These few instances were fleeting, though. Any sort of movement or acknowledgement I made regarding what was happening seemed to start the process all over again.

Having difficulty quieting our own thoughts is common among people who don’t meditate regularly. With all that goes on in our lives, from remembering appointments to thinking about that big project at work, it’s hard to focus on the moment and our own place in time — even as sensory deprivation facilitates a meditative state. But once past these obstacles, meditation confers many benefits, like improving memory and healing pain.

What it looks like from inside the pod
at Lift/Next Level Floats. Brittany Williams

After my session I emerged from the tank feeling strange and kind of sluggish. I sat in Lift’s decompression lounge trying to collect myself and process all that had just happened. While I did have some very brief moments of relaxation, I don’t think sensory deprivation tanks are the best use of a person’s money or time for meditation. There are a lot of other time- and cost-effective alternatives, like yoga or exercise, which provide the same if not better results for meditation and relaxation. Nevertheless, if you happen to find meditation difficult with the constant buzzing of the world around you, then perhaps sensory deprivation is right for you.