Conti ended up in the war zone not long after finishing boot camp and other training.

“It’s a very sudden shock to the system, you know, when you wake up one morning, talk to somebody and then the next morning you wake up and you’re told they’re not there anymore,” Conti recalls.

He has been battling post-traumatic stress disorder since his time in the Middle East but finds peace with floating.

“I call it my mental scrubbing, if you will,” Conti describes. “When you have so much stress that you just need to be, like, ‘Hey, I gotta figure something out,’ this is what I do. I come and float.” 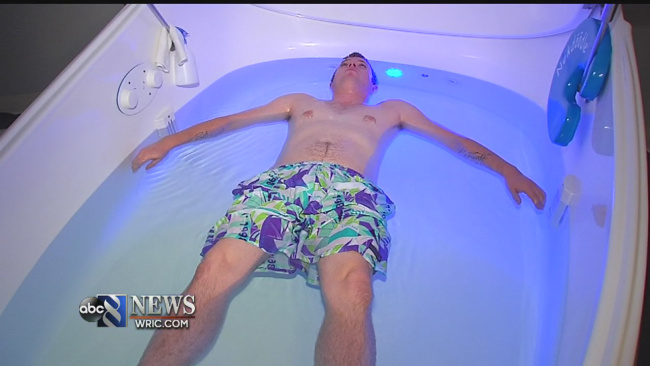 Float therapy originated in the 1950’s at the National Institutes of Health, where Dr. John C. Lilly developed sensory deprivation tanks. The practice fell out of popularity in the 1980’s, but now what is old is new again.

Tanks filled with 1,000 pounds of Epsom salt and warm, filtered water allow people to lie back and become buoyant.

“We’ve had a lot of people amazed at how good they feel physically when they come out,” explains Dr. David Berv, who has operated Richmond’s Back In Action chiropractic clinic since 1998.