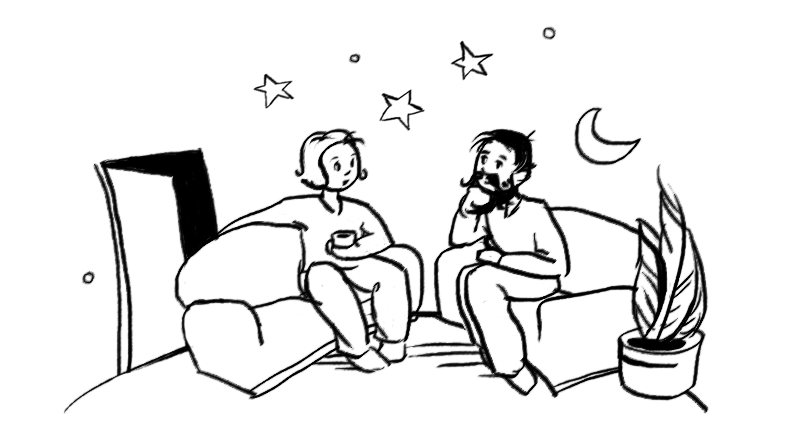 I like to think of our float center’s lobby as a sort of no-man’s-land. It sits between the nothingness of the float tank and the everythingness of the outside world. A place where people can attempt to merge these two realities, and let them both simultaneously sink in.

What we have in our lobby is a novel environment in its own right. People are put into a context they have not been in before, and in my opinion, that’s the perfect recipe for having a great interaction.

I’ve talked to hundreds of people after their float, as they sink back into one of our cushy couches and wait for their tea to steep. I don’t know where these people live, what they do for a living, or how the weather was on their way over. But I know their passions. I hear about their hopes, their aspirations, their childhood dreams…

The float tank gives us a chance to interact with people after they have shrugged off their conventions and barriers. We get to talk to people, not strangers. I’ve thought a lot about the proper way to for me to talk to someone in this state. What I’ve realized is that any sort specific attitude I try to put on or any conversations I try to purposefully implement all end up feeling unnatural when speaking to someone who has just come out of a float tank. They are in the their most human state, and the only way I can really relate to them is to be a human myself.

So that’s what I do. I just act like myself. I treat them like I would a friend. We talk about anything and everything, from how their float was to how great it would be to have a house entirely made of trampolines. As a result, many of our floaters actually do become our friends. The distant customer-server relationship breaks down, and instead it just feels like we’re all hanging out.

When we have new customers come in they can sense the laid-back atmosphere from our regulars, and they fall into it themselves. This has led to our lobby feeling continuously warm and inviting, much more like a living room than a lobby. While at first that may sound odd, I think it’s actually quite appropriate, because where better than a living room to hang-out with your friends?

One thought on “Hanging Out”