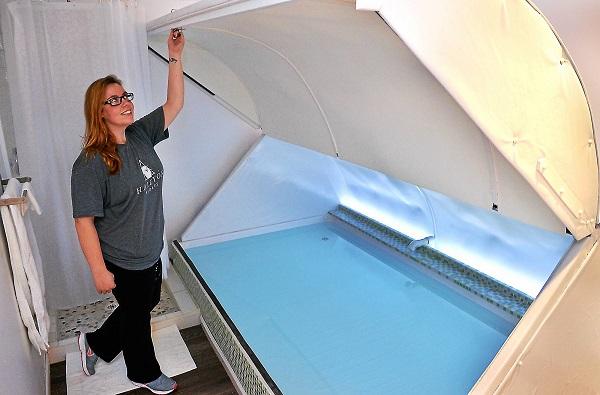 ROXBOROUGH >> Ridge Avenue’s bustling thoroughfare became home to one of the quietest places in Philadelphia with the opening of Halcyon Floats Nov. 28.

Described as a “float spa,” the new Halcyon Floats location houses two tanks in which customers float on a shallow pool of an Epsom salt and water solution heated to about skin temperature to put the customer in a sensory deprived environment and help him or her achieve a relaxed, meditative state, according to halcyonfloats.com.

Owner Kerilyn Rakickas said the high level of Epsom salts, quintuple the concentration of salt in the Dead Sea, makes people especially buoyant and also serves as a good source of magnesium, an important mineral of which many Americans do not get their recommended daily allowance.

The customer takes a shower before entering the tank in order to wash away excess oils and chemicals then climbs into the tank where he or she will float typically for 90 minutes in the dark, soundless tank before being drawn back to wakefulness by relaxing music gently rising in volume, Rakickas said.

Though Rakickas recommends embracing the sense deprivation to receive the full benefit of that trance-like state, comfort is paramount, so the Roxborough location features bigger tanks — the pool area is 9 feet by 5 feet — doors that can be left partly open and interior dimmer lights for customers who are not yet comfortable with the idea of going without sight or hearing.

In a relaxed state, Rakickas said, blood pressure goes down; levels of cortisol, a hormone commonly associated with stress, go down; and people experience lucid dreaming along with enhanced creative problem solving. Other studies are being conducted into the health benefits of floating.

Roxborough’s is the second for Halcyon Floats, the first having opened on Girard Avenue in March 2014, according to Rakickas.

Rakickas said she discovered floating during a trip to Portland, Ore., in 2010. She described her first experience as pleasant though not as intense as she had expected. It was only the next day when she woke up that she was truly sold on the floating.

“My stress level was through the roof and I always had issues, probably since I was 18, with sleep; I’d just never really get a full night’s sleep,” Rakickas said. “While my first experience was kind of weird, it was impactful, in that that night I had the best sleep of my life.”

She started floating regularly and said it was when she was looking into buying a personal tank that she thought to go into business.

The name Halcyon [pronounced hal-see-uhn] came from a search for words that convey tranquility, but Rakickas said she knew it was right as she read about the mythical Greek seabird that was said to calm the seas for the two weeks around the winter solstice from which we get the modern definition and the phrase “halcyon days.” The associations of calm and water matched perfectly with the business.

Rakickas said she expected to have to spend some time informing people in Northern Liberties about floating and its health benefits but was delighted to find word had spread to Philadelphia through famous figures who have used and speak publicly about the practice, such as Joe Rogan.

“I had people like bang down my door to come in, and it was a whirlwind that first year,” Rakickas said, “and after my first year, I said I have to open a second one.”

Northern Liberties had proved convenient for people from Northeast Philadelphia, Bucks County and New Jersey, so Rakickas said she hopes the Roxborough location will make floating accessible to people in other parts of the city and its western suburbs.

Halcyon Floats is located at 6068 Ridge Ave. Rakickas said sessions can be purchased individually, in bundles or through monthly membership. Deals throughout the holidays will be posted on the company’s Facebook page and more information on floating can be found at halcyonfloats.com.