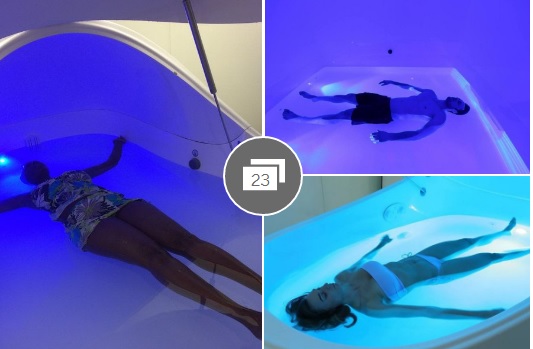 Vanessa McDonald-Hobbs climbed into the small, shallow pool, pulled a large clamshell lid over the top and eased, flat on her back, into the water. She closed her eyes. Because of the high salt content, she didn’t have to worry about steadying herself — she immediately floated.

Stretching her buoyant arms out wide, she felt the warmth of the water, heated to body temperature, gradually fade away until there was nothing left but stillness.

Soon obscuring her usual tangle of everyday thoughts about work and family was a strong image — the product of what some might call visualization.

McDonald-Hobbs, 58, had been training for a half-marathon. Floating in the pod of saltwater, she pictured herself finishing the race, powering across the final stretch.

“I could see myself running across the timing mat,” she says. Not long after she left the saltwater tank, she ran that race. Everything was just as she had envisioned: No obstacles. Clean finish. 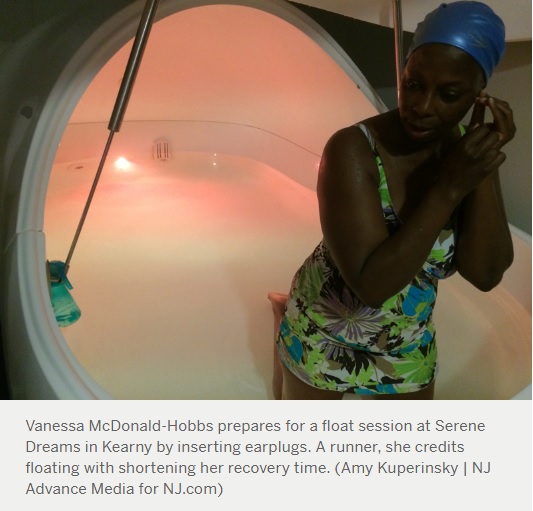 McDonald-Hobbs is one of a growing number of New Jerseyans finding solace in flotation therapy tanks. Also known as sensory deprivation tanks, these dark pods, or pools of water, are saturated with Epsom salt, which instantly sets the body afloat, creating a weightless sensation. For fans of floating, the practice can be a route to relaxation, enlightenment and drug-free pain relief.

Devised in the 1950s, the concept — which endeavors to expose the brain to as little stimuli as possible — has experienced a resurgence in recent years, becoming a mainstream habit endorsed by professional athletes and backed by a growing field of medical research.

In an effort to decompress, McDonald-Hobbs, who lives in Linden and works on scholarship programs at Rutgers University in Newark, had tried meditation, but her to-do list was always front of mind. A massage therapist suggested floating. The first time, it took her 15 minutes to power down.

More than a year later, McDonald-Hobbs is a regular at Serene Dreams, a float spa in Kearny.

What is flotation therapy?

Owner James Saad discovered floating when he was having trouble acclimating to life abroad as a graduate student at Oxford University. He says London float sessions put him on a better path. Saad opened Serene Dreams in 2013 and says police officers, firefighters, veterans, artists, athletes and those prone to road rage have made use of his three float rooms. So has anyone trying to quiet the internalized bustle that comes with living in a metropolitan area.

“People are really getting into holistic ways of healing themselves,” says Saad, 39. Priced similarly to massage, floating costs $75 per hour at Serene Dreams, though some float for up to two.

Most of New Jersey’s dedicated float spas have only opened in the past few years. However, lest anyone think floating is a flash in the pan, owners have said interest is so great, they’re expanding their facilities. Aaron Thomson, co-founder of Floatation Locations, a Toms River-based online directory of flotation businesses, says when the website started up in 2011, there were about 80 float centers in the country. Floating, he says, was more commonplace in Europe and Australia…continue reading