Blog » Floating in your own little pod is sure way to deep relaxation
Posted on August 3, 2015
Tweet 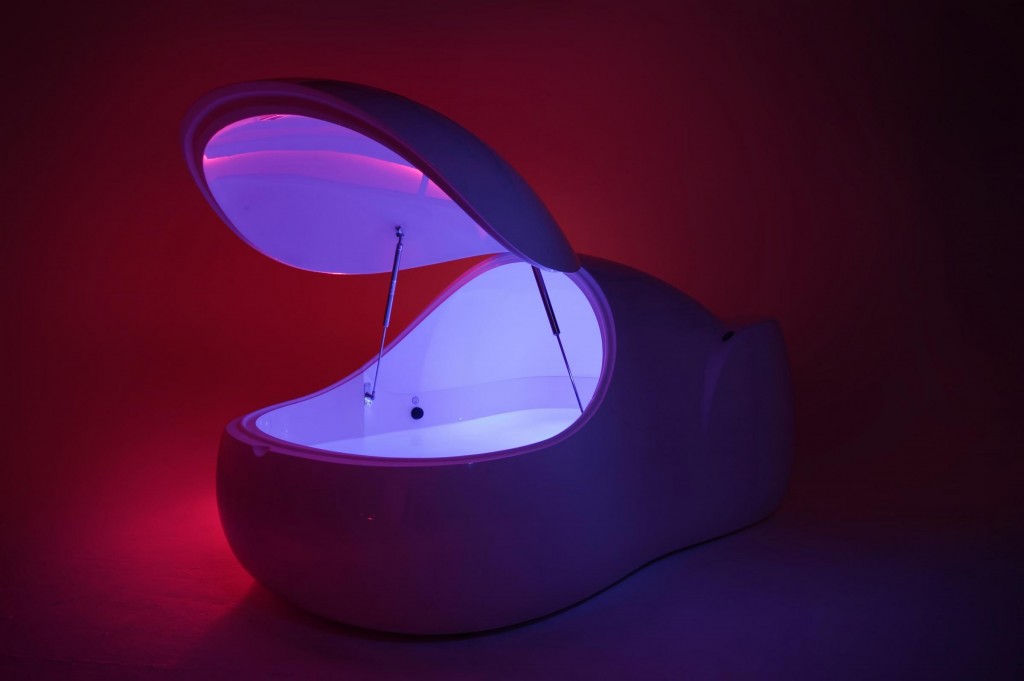 Being a complete technophobe – lighting a gas oven is a mammoth challenge – as well as a bit of a claustrophobe, the idea of immersing myself alone and naked into a float tank in a locked room and depriving my senses of any input whatsoever was a bit scary. What if I had a panic attack trapped inside what is essentially a sealed bath and couldn’t get out? What if the electrics went wrong and I got electrocuted? Would the whole experience of sensory deprivation be enough to tip me over into madness?

This was how I was feeling as I headed down to Pangbourne where Michael Cordova and his financee Tina Pandher opened a dedicated floatation centre, Floating Point, in Horseshoe Road last month. But the couple reassured me that not only was floating safe, it also had numerous health benefits.

“It’s the equivalent of having four hours’ deep sleep,” said Michael as he led me into one of the two float rooms. “And some people say it is the closest you get to the sensation of floating in space. You will feel as though you don’t know where you end and the water begins.”

The oval-shaped pod sits in the middle of the room, and is filled to about 10 inches deep with water at body temperature and enough Epsom Salts to recreate the density of the Dead Sea, meaning it is impossible to sink. Michael pointed out that there is a call button to reception, and a switch to dim the lights if you so wish. The whole experience is better if you close the lid, but for nervous customers like me it is perfectly OK to leave it open.

So there I was, all alone in a bath of tepid salty water. It felt strange, and perhaps a little self-indulgent, but I closed my eyes and listened to the soundtrack of waves gently lapping against the shore and thought I could hear the distant mewling of a seagull. The coloured lights inside the tank changed from violet to blue. I was floating without the need to make any kind of attempt to stay afloat.

If you are as stressed and uptight as I was that day, due to a busy work deadline, no doubt it takes longer to relax and let go than if went in, say, straight after a yoga class. On this particular day the stress had crept into my shoulders and neck without me even realising it, but as the rest of my body gradually succumbed to the sensation of weightlessness the pain in my shoulders was all-consuming. This was rectified by reaching outside the tank to grab a little blow-up neck pillow that I’d left on the floor by the pod on Michael’s advice. Once fully afloat and with the tension gently ebbing out of my shoulders I had the weird sensation of tumbling over backwards, like an astronaut turning backward somersaults. After a while, though, when the music stopped, I could hear nothing, and was only vaguely aware of the lights changing colour from the different patterns they made on the inside of my eyelids.

After a while, sensing that I wasn’t in any danger and feeling a little chilly, I summoned the courage to close the lid on myself and settled back into the float.

It’s hard to say what happened after that. With no outside stimuli – such as conversations, ambient noise, people or traffic going past you – there is only you inside your head and the vague sensation of being in water. It was true that at times I became aware that my body seemed to have melted into the water, but at other times I found myself replaying on the internal radio scenes from the day at work, then berating myself for not relaxing.

Time passed, and then the music began again, signalling the end of the session. I thought I had only been in there for 20 minutes, but already an hour had passed, leading me to suspect that I had drifted off to sleep at one point without realising it.

After taking a shower (you don’t need to bring anything – earplugs, towels, shampoo, shower gel and even a hairdryer are all supplied) I was invited into the relaxation room where a watermelon and lime sorbet was waiting for me, followed by a cup of herbal tea.

Michael explained that the therapy has numerous health benefits, from releasing endorphins to lowering blood pressure. One thing’s for sure: I certainly was a lot more relaxed at the end than I was when I arrived.

Research shows that floating can reduce blood pressure and heart rate whilst lowering the levels of stress related chemicals in the body.

The first flotation tank was developed in 1954 by American neuro-physiologist Professor Dr John C Lilly to investigate the effects of sensory deprivation on the mind and body.Epsom salt is a naturally occurring pure mineral compound of magnesium and sulphate which are readily absorbed through the skin. Magnesium can help reduce inflammation while sulphates help improve the absorption of nutrients, flush toxins and help ease migraines.

via: The Reading Chronicle