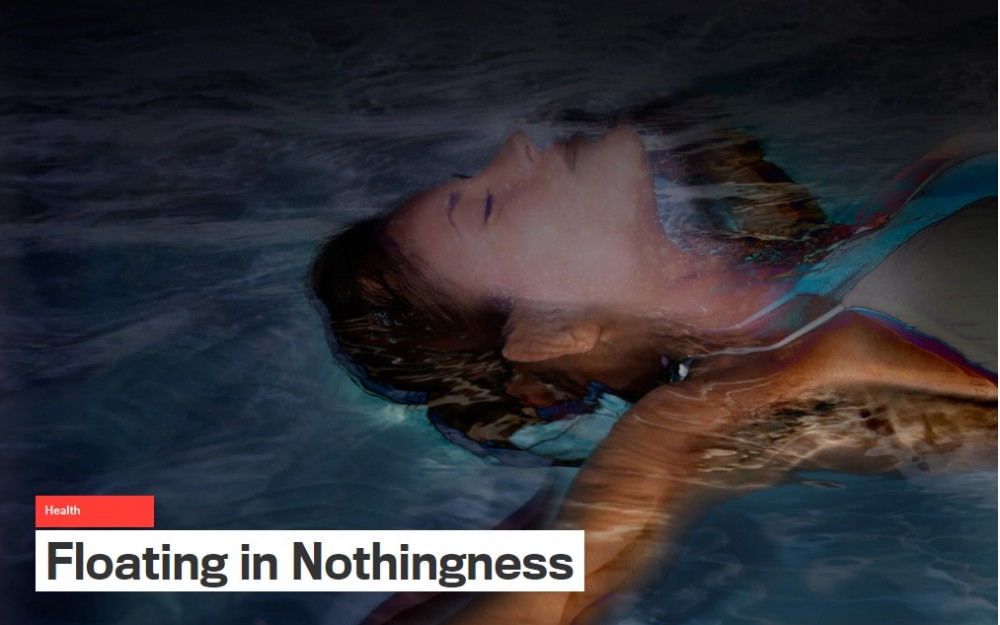 Here’s what I learned from my introduction to sensory deprivation.

I watched the movie Altered States one summer in my early twenties at a friend’s parents’ house in coastal Maine. The film was inspired by John C. Lilly’s sensory deprivation research done under the influence of psychoactive drugs. In it, William Hurt plays a professor studying altered consciousness and experimenting on himself in a floatation tank under the influence of mind altering drugs. As the film progresses Hurt’s experimentation causes him to transform both mentally and physically with horrifying repercussions. Despite how much the film scared me—bad trips, biological devolution—I’ve been intrigued by sensory deprivation ever since.

Sensory deprivation is a deliberate removal or limiting of stimuli from one or more of the senses. It is meant to induce and encourage a meditative and hopefully transformative experience. My fascination with it was fueled by a healthy fear of the unknown, and I’ve long wanted to try it. I wanted to have a big, weird experience—minus the drug freakout part. (Hopefully?) Turns out, it was really easy to book a sensory deprivation float tank all along, not so far from where I live.

A few weeks ago I found a place called Lift: Floats in Carroll Gardens, Brooklyn and booked two sessions, one for me and one for my boyfriend. The sessions last an hour during which time you float weightlessly in a bath of body-temperature water full of epsom salts. Like in the Dead Sea, the salt makes you float.

The staff at Lift really wanted us to use the bathroom before we began. They also strongly encouraged us not to use drugs, eat a heavy meal, drink too much caffeine, or shave before our appointment. You have two watery options: a tank or a pod. Since the thought of closing the pod’s lid over my head scared me too much, I chose the tank.

After showering in the tank’s outer room, I entered totally naked except for a pair of orange ear plugs. It’s a sealed room full of a few feet of water about the size of a large bed. Although the tank has “celestial” ceiling lights that look like stars, I opted for total darkness. I wanted the most nothing possible.

Since I’m extremely near-sighted and you’re advised not to wear contacts or glasses, everything in there was totally blurry anyway. First surprise: I floated at the very surface of the water. At least a third of my body occupied the air above the water line, and I could feel the temperature difference. Second surprise: being weightless wasn’t relaxing at first. It was fun and if felt nice, but it was hard to fully relax the muscles in my neck, and I became very aware of a tightness in my right shoulder. It took at least 20 minutes for me to get comfortable. I tried lying with my arms and legs in different positions, arms at my sides, hands up, hands down, knees straight and then bent, arms stretched up straight above my head. All this moving made me drift and I bumped into the walls. I thought about how dumb I must look.

But in the complete darkness, all alone, no one could see me. There was no difference having my eyes opened or closed, except for the slight cool air I could feel on my eyeballs. My stomach growled and I thought about Sal’s Pizza across the street. Then I thought about the neighborhood Italian bakeries where I first tried iced coffee. Then, miraculously, I thought about nothing. I heard my own breath, and my mouth felt dry so I closed it. And then, in what felt like a matter of minutes, the hour was over. Had I fallen asleep? I’m not sure.

While getting dressed, I felt stoned. My thoughts were slow, I had a hard time talking, and my face was covered by a big dumb grin. It felt a little like I had just finished a very good yoga class, my brain swept of all bullshit. Neither of us had a particularly spiritual experience. We didn’t see anything crazy or discover something amazing. My boyfriend said he was really glad we went, but for the same amount of money, he’d rather get a massage. (I would like both, please.) He also said that the pod didn’t allow for complete darkness, which bothered him. In the end the experience felt more like a spa treatment or yoga class than like an existential awakening. Maybe it would have been better on drugs. Maybe William Hurt had it right all along.

Either way, we felt totally high. Immediately afterward we went to eat pizza.