Float tank therapy resurges in popularity in the Twin Cities

Float tank therapy resurges in popularity in the Twin Cities 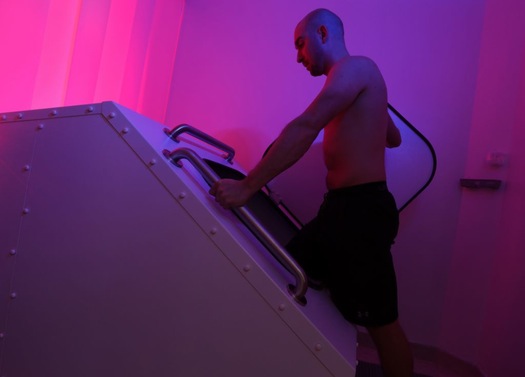 Travis Bonovsky’s hands shook from stress four years ago. He drank too much, he admitted, not knowing how else to cope with his taxing advertising job.

Bonovsky knew that he needed to make a change in his life, but he wasn’t sure how to do it.

Then, out of curiosity, he stepped into a float tank.

“When I floated for the first time, so much stress dropped off that I was just blown away,” Bonovsky said. “I was smiling from ear to ear and I couldn’t tell you why. I just felt good, better than I had in years.”

The Brooklyn Center resident bought a membership immediately after his first float and has been floating about once a week ever since. He quit drinking cold turkey after his fourth float and said nothing has been more beneficial for relieving stress than the float tank.

Float tank therapy, once a popular wellness practice for relaxation, meditation and chronic pain relief, is resurging in popularity in the Twin Cities. Floaters typically lie in an enclosed tank of supersaturated saltwater for 90 minutes. The water is traditionally about 10 inches deep and has greater than 35 percent Epsom salt salinity, which is higher than the Dead Sea, to allow people to float effortlessly. 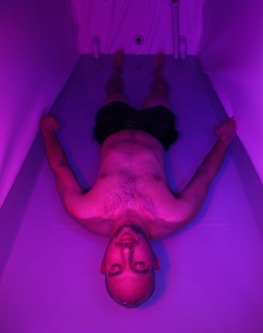 “It’s like a water bed without vinyl, because you are totally gravity-free,” said Terri Burks, owner of the Wellness Center in Minneapolis, which has provided float tank therapy for over 20 years.

Float tank therapy is often called Restricted Environmental Stimulation Therapy or sensory deprivation therapy because tanks reduce external stimuli such as light, sound and touch. The nearly pitch-black tanks are silent, and the water is 93.5 degrees to match the body’s external temperature. Because the body doesn’t have to work at staying afloat or processing outside distractions, it can completely relax.

“Many of our clients who meditate call it the fast track to meditation,” said Chris Richmond, owner of Awaken for Wellness, a St. Paul wellness center.

Richard Bonk, who has been floating for 35 years, enjoys the lack of sensory distraction and physical discomfort. He said he doesn’t have to work at creating a meditative space when he floats.

“It suspends you in this place between sleeping and waking,” he said.

St. Paul native Dr. John C. Lilly began researching the benefits of float tank therapy in the 1950s. Floating caught on for commercial use during the late 1970s and early 1980s, but it dropped in popularity during the AIDS scare in the 1980s. People were afraid they could catch diseases in the tanks, even though float tanks are sterile environments.

The Wellness Center’s assistant director of operations, Tim Worsham, said Lilly and other researchers originally thought if external stimulation was eliminated, people would go into panic mode and shut down. Instead, they found that the opposite was true — that sensory deprivation caused boosts in creativity and relaxation.

Other studies have tested float tank therapy treatment for chronic pain, fibromyalgia, anxiety, depression and post-traumatic stress disorder. Athletes use it to increase performance accuracy. Worsham said some of the Minnesota Vikings float at the Wellness Center.

Even though there are many health benefits, float tank therapy may not be for everyone. Bonk said one of the biggest barriers for newcomers can be claustrophobia. It may seem daunting to get into a dark, enclosed box, but he assures people they will be in control and can push open the door if needed.

Without spatial awareness and visual cues, most floaters feel like they are in a more open space, Burks added. She tells her clients that if they are comfortable in a tanning bed, they should be comfortable in a float tank. The tanks are larger and have more space from people’s bodies to the top of the tank.

For those who cannot fathom entering a small tank, Awaken for Wellness created a float room, with a bigger floating environment. Richmond said it may be a better option for newcomers who are nervous about claustrophobia.

Worsham stressed that everyone has different experiences and it may take a few floats to get used to the tank’s environment, which is why the Wellness Center and Awaken for Wellness recommend that newcomers try floating two or three times.

“It clicks for a lot of people,” Bonovsky said. “It’s hard to describe a float experience. It’s different for everyone. You have to get in and experience it for yourself.”

Madison Bloomquist is a University of Minnesota student on assignment for the (via) Star Tribune.