My name is Tom and I own a float center on Long Island called The Float Place. Here is the saga of how I got my beloved float tank. 🙂

I first saw the “Float to Relax” tank for sale on a site that listed used float tanks. I had never heard of the brand so I tried to do some research on it but came up with very little information. The only things I could find out about them is that they were made until the late 80’s, meaning the tank is at best 25 years old, and were very solid in their construction.

I contacted the seller, who actually ran a float center in New Jersey, and got some basic info on the tank. She told me she had owned the tank for about 20 years, and got it as a gift from the original owner. She told me everything worked on the tank and that it was in good shape. I told her I needed a day to think about it and speak to my wife about it.

I called her the next night and told her I wanted the tank. The combination of the tank being semi-local and a decent price was too hard to pass up. We negotiated a final price and arranged for me to come get the tank that next weekend. The agreement was for me to come there, see the tank in running condition and then drain it, disassemble it, then remove from the premises. In addition to the sale price, a security deposit was to be set aside against damage to the premises during the removal process. I was told the tank was in a finished basement, but the basement had been finished before the tank was there. Meaning, the tank went in, it should come out the same way. Right?

Upon arriving and seeing the setup, it was immediately obvious to me that there was no way that the tank was moved into the basement post construction. That tank was down there first, then the basement was built around it.

However, I gave her the benefit of the doubt, inspected the tank, filter and pump. Water was to temperature and the pump worked. Water did look a bit low, around 8 inches, but I figured she may have not been on top of maintenance as of late and let things slip a bit. There was a massive amount of salt that crystallized and bonded to the bottom of the tank. Awesome.(not really)

My friend and I drained the tank, then began the work of removing the tank. The tank has 3 parts, an outer shell, and inner shell that fits inside the outer, and a top.

Once we got the top off and tried to make the 90 Degree turn that led right up stairs the idea of getting this thing out dissolved.

So I knew I had to figure out something. I turned to the seller and said,

“Ok, we have 2 choices here. One-we take down this wall because there is no way this thing is going out like this. or Two-You give me my money back and that’s that. Now, before you answer, just remember, i’m here already with a truck and cash. If you give me my money back the next buyer is gonna be right back here where I am. Get me?”

-“Well there is a third option. We can take down this wall here (points to a wall on other side of too ) and there is a cellar door that opens to the back yard”

Well OK! Now we are in business. Or so I thought. Before removing any wall I asked to see the stairs that I would have to use. There was so much water damage from neglect of upkeep that the stairs actually eroded away and formed a cement slide-like structure.

Still…I wanted to get this done. So we did. We took down paneling, then sheetrock, then insulation, then a door.

Then I saw my Float to Relax in the daylight. And Its a sight I will never forget.

We loaded it into my rented Van, fit like a glove, and made the 3 hour trip home.

This is where the work began!

I’m not sure how often she used her tank, or how often she maintained it. But there was a significant amount of salt sediment in the tank. The crystalized salt is hard as a rock and sharp as a razor making cleaning both difficult and hazardous. I spoke with Graham Talley from Float On in Portland, OR and he gave me some advice on how to start the process of cleaning the salt out.

I started with boiling water to try to get some of the sediment loose and break off of the walls. I tried to get the largest pieces I could off at once but sometimes only teeny tiny little flakes would come off. Very frustrating!

After 12-15 gallons of boiling water I switched to near boiling white vinegar. This proved to be very useful in breaking up chunks from the walls. The good thing is that often the large chunks would break off leaving a very very clean tank wall behind it. I went through about 20 gallons of white vinegar. I liked using this because it was effective and not a chemical. I also would fill with about 6 inches of water and 4 gallons of vinegar to soak overnight. This worked and I did it a few nights in a row. I would fill, let soak, scrub, drain, fill, drain, fill, soak, scrub, drain.

After this I filled the tank up with about 6 inches of water with chlorine and let it soak overnight to try to loosen the remaining salt. This, coupled with scrubbing like a maniac, helped as well.

At this point I had about 60% of the salt removed. From here I moved onto a 2600PSI power washer which was excellent for removing a lot of the remaining sediment. Care needs to be used to not damage the gel coat that is on the tank. I did not use the jets that spray direct onto one spot, but use ones that fanned it out more so as to not poke any holes. 2600PSI could go right through fiberglass if it was sprayed on one point of the tank.

The outside of the tank was cleaned using Comet and a soft sponge. I cleaned it 3 times, waxed the exterior 6 times, and put it all back together.

Great! Right? Well, not exactly. I finally filled the tank with the appropriate amount of water to find that my beloved float tank had, ELEVEN different spots that water was weeping out of. What a disaster!!!

Well, one benefit of having the tank and not being open yet was that I didn’t have to rush this fix. I researched online how to repair fiberglass, went to a few boat places and spoke to some people, then went and bought the materials from Home Depot. Fiberglass Resin is, in fact, the worst substance to have to work with. It is toxic to smell, touch and dries in about 15 minutes. What ever you mixed it in and used to apply it to the tank is now garbage because it hardens. So, I went through 5 mixing buckets and paint brushes because of the rate at which it hardens, there is no way I could do the tank on just one batch. Just not enough time to do it.

The resin is applied with a paint brush and then the layers of fiberglass are put down on top of one another. Brush out any air bubbles you can and let dry. 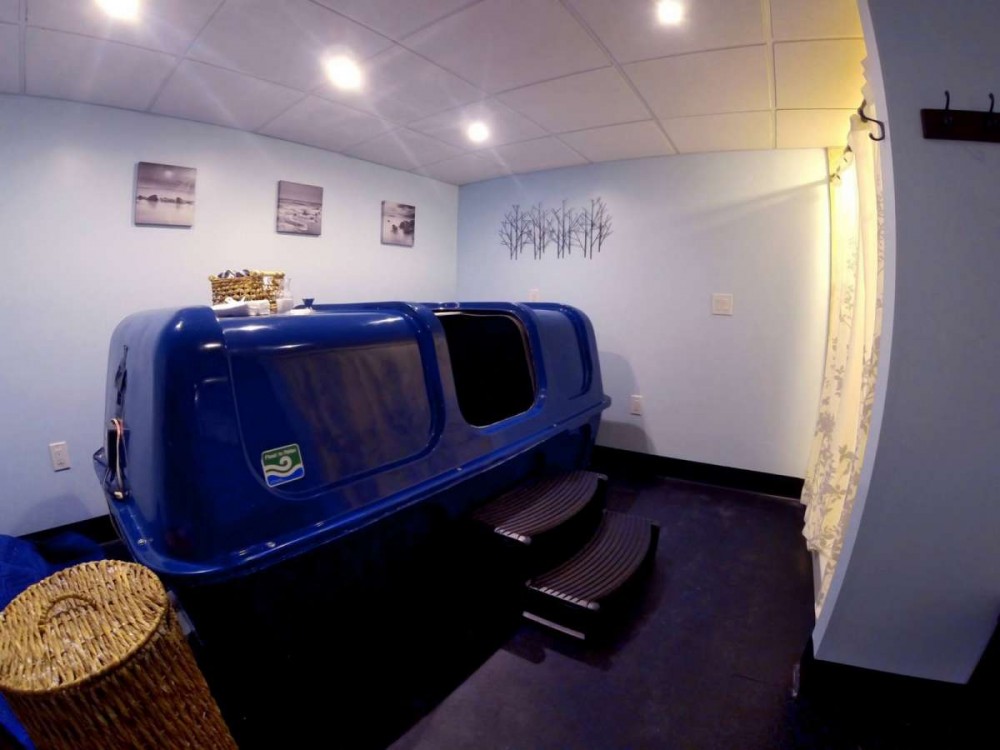 The next I filled the tank with 11 inches of water to find no leaks, a very clean tank, and a functioning heater! Although my heater controller didn’t work. Still, finally this thing is ready for some salt water! Total working time was about 80 hours. 60-65 hours of that was spent on the salt removal, the remainder was spent on the exterior of the tank, setting up the filter and pump elements, and staring at it hoping it would build itself. 🙂

Hope you enjoyed reading this as much as I enjoyed remembering it! if you have any questions about this write up, or about float tanks in general and think I can help, please email me at thefloatplace@gmail.com