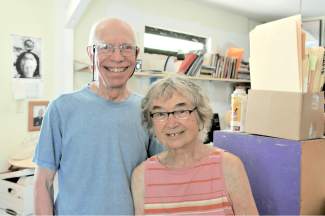 Before he published his science fiction novel, “Congo,” in 1980, the late author Michael Crichton had writer’s block.

Perry, who, with husband Glenn Perry, has lived and run their floatation tank business in Grass Valley since 1989, said Crichton’s writer’s block followed the successful premiere of a major film from one of his books. His publisher had paid him a hefty advance for more novels. But at that time, the writer, for some reason, was stuck.

Crichton came to the Perrys, hoping that floating might help him get unstuck.

After floating a few times in the then-counterculture tanks, Crichton emerged, sharing an insight with the Perrys. While resting in the completely dark, soundless tank in a bed of Epsom salts-buoyed water and searching his soul for the roots of his creative stagnation, he got it.

“He said, ‘You know, they always pay me after,’” Lee Perry recalled. “‘When I write a book, then I get paid.

‘This time, they gave it to me up-front,’” she remembered him saying. ‘“So I couldn’t write; I was already paid.’”

After that, Crichton bought one of the Samadhi tanks for himself. A short time later, “Congo” was published and Crichton went on to achieve a highly prolific and successful career.

“What I would say, is that people become more present,” said Glenn Perry, explaining the recent phenomenal explosion of interest in floatation tanks after 40 years of relative obscurity. “They move into the ‘being’ space — if you’re more present, you’re in touch with the creative.”

The Perrys say that space of inner knowing, self-contemplation and complete relaxation has become an attractive balance to the culture’s increasingly stressful multitasking, emotional turmoil and omnipresent technology.

“It used to be that some people would get it (sense of presence) the first time they floated and some needed to float three times,” Glenn Perry said. “It seems like now, most everybody gets it the first time.“

Sales of Samadhi float tanks have tripled in the last two or three years from what they were five years ago, the Perrys said. They decline to give specific numbers for proprietary reasons.

According to the Wall Street Journal, there are now 267 float centers in the U.S., up from an estimated 85 in 2011. Samadhi now has at least 10 competitors, with new firms and franchises opening almost every week, Lee Perry said.

In addition to the public tank at the Perrys’ property, which is available for about 10 clients per week for an hour to an hour and a half per session (usually about $35 per hour), the nearest float center to Nevada County is in Marysville.

A few private tanks are in Sacramento, but the Sacramento Valley has not yet embraced floating the way it is catching on in the Bay Area and on the East Coast. However, it’s only a matter of time, the Perrys say.

“From my point of view, the whole planet has become more spiritual,” Glenn Perry said. “Everyone is becoming spiritual; it’s amazing compared with five years ago.

“Twenty years ago, our competition would point to us and say, with a sneer, ‘Uh, they’re so spiritual,’” he said. “Now, it’s not a negative.”

Floating can result in health benefits, such as lowered cortisol levels, improved sleep and release from back and shoulder pain, according to the Wall Street Journal article.

Although larger research studies are needed, preliminary reports indicate it can reduce anxiety and stress, the Journal article states.

The latter was the case for reporter Noah Hurowitz of in The Brooklyn Paper as posted in an article on the Samadhi Tank Co. Facebook page, Hurowitz didn’t know whether to expect to be burned in an explosion like actor William Hurt in the film “Altered States” or drowned in a mini Red Sea. He found neither.

“In the end, I escaped the pod with my mind intact,” Hurowitz said in his first-person account. “While I must report a disappointing lack of visual tricks … I walked back into the Carroll Gardens (New York) sun feeling more well-rested and stress-free than any time in recent memory, ready to face another day of community news reporting with a smile on my face.”

For Lee Perry, 83, who has been floating almost every day since the couple founded its first float center in L.A. in the late 1970s, it’s a matter of much amusement.

“I’m well-marinated,” says Lee, who floats every day at 5 a.m. or so in a private tank she keeps in her bedroom. “You can’t help but go into a meditative state.

“I used to be very angular,” she says, beaming one of her frequent smiles. “Like any New Yorker, I was ‘What’re we doin’? Let’s go.’”

The couple met when Lee, who came to L.A. to teach, volunteered for an isolation tank study to see if she could gain skills to grapple with inner city third graders who “were throwing each other out the window,” she said. “I wanted to search for how I learn — maybe if I could find that out, I could pass it on, and we could transition from total chaos to a place where we could imagine we were learning something.”

The study was run by a friend of Glenn’s, who was then a computer programmer. Now 72, Glenn had in the early 1970s read “Center of the Cyclone,” by the late neuroscientist John Lilly.

After seeing Lilly’s ad for a workshop in the Big Bear Mountain above L.A., Glenn attended what became the first try at using a sensory deprivation tank — that early one made out of a rock bowl and covered with a wood bath house chinked with mud.

Glenn, who at the time suffered from extreme shyness, volunteered to be the first to try floating, Lee said. “When he came out, Lilly said to him, ‘Do you want to tell us anything about it?,’” she recalled. Glenn began talking to the group, but, after a few minutes, stopped short.

“I’m talking in front of people,’” Lee said her husband thought to himself. ‘“This is good.’”

“He had never been able to speak in front of people before,” she said.

In 1972, Glenn, with Lilly’s blessing, began making the tanks out of wood, selling four or five of those early models. Lee joined him in a home-based business in 1974.

They began crafting the tanks in cardboard, which was lighter. The pair, who were given the name Samadhi for the business by Lilly, set up a five-tank center in Beverly Hills in about 1979.

“Samadhi is Sanskrit,” Lee said. “If you use the Random House (definition), samadhi is a state of deep relaxation.

“But if you go to the (Indian Sanskrit grammar guide) Pantajali version, it says it’s a state where the meditator becomes one with the object of meditation,” she said. “John Lilly gave us the name because you can approach that state in the tanks.”

In 1989, they moved to Grass Valley to enjoy a more rural lifestyle, particularly for Glenn, who was raised on farms in upstate New York and Massachusetts.

Now, the tanks are made of ABS plastic. In addition to ventilation systems and other amenities, the tanks automatically disinfect the water — which has 700 pounds of Epsom salts dissolved in it — for 20 minutes after each person’s float with a filtration system that uses ozone and 35 percent hydrogen peroxide. Water is kept at about 93.5 degrees Fahrenheit — the same temperature as skin.

The Perrys have the tanks made in downtown Grass Valley. They then add the various systems at their rural Grass Valley property. The tanks start at $11,000 and business is brisk, they say.

Perry said she’ll never forget his comment after the purchase was made.