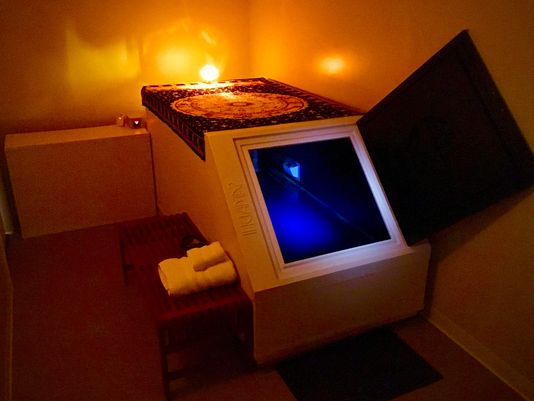 Imagine climbing into a tank filled with water. It is almost completely dark, and there is nothing to do but float for an hour. When friends heard me talk about trying a sensory deprivation tank, they all said there was no way they would do it. Instinctively they felt claustrophobic.

My real fear? What would I do if I couldn’t check my email, Facebook and Instagram for a whole hour?

“You’re completely in charge of the experience,” said Brandon Fink, who opened Laniakea Flotation Tanks across from West Town Mall. “A light inside glows blue – it’s not completely dark. You can leave the door to the tank completely open, or use a hand towel as a wedge to keep the door open. It’s up to you.”

Floating is effortless. The tank is filled with just 10 inches of water and 800 pounds of Epsom salt, or magnesium sulfate, added to create a buoyant environment. Eyes adjust to the dim lighting in no time at all. The water is heated to skin temperature and there is a control to adjust it.

The hardest part? Quieting the mind. Ignoring the endless list of things to do that day, wondering if you will drift off to sleep, hoping the timer was set and the sound of the filtration system kicking in would be enough to signal the end of session.

“The first 15 minutes is really trying to unwind your mind,” he explained. “It’s not just because you’re in a tank filled with water — it’s hard for people to shut their minds down – they start thinking about their kids, or something they forgot at the store.”

The sensory deprivation and weightlessness aids in removing all of the distractions people are used to, according to Fink. “It brings your mind back to a restorative state,” he said. “People think they can’t shut their brains off. But like a massage, they’re disappointed when it’s over, and people who think they will feel claustrophobic say they often end up closing the tank door.”

“The first float is very foreign,” Fink said. “They feel like they should be sinking in the water. We recommend that you float for at least 90 minutes the first time to allow yourself to fully unwind.” At least three floats within a two-month period, Fink said, is most beneficial.

“They are 100 percent completely private,” said Fink of the float tank rooms. “They each have their own shower, and we provide essentials such as towels. I don’t intrude at all, but there is a monitor in the room if you need to call out.”

Swimsuits are optional for floating. A light meal and avoiding caffeine to limit “jitters” is recommended. Floating is limited to age 16 and up, pregnant women should consult their physician first and people should wait at least two weeks after coloring or treating hair as the salt can damage it.

“Our water is very clear; we use a UV system to purify the water,” Fink said. “It is crucial that people shower before entering the tank to prevent soaps, chemicals and oils from getting into the water.” 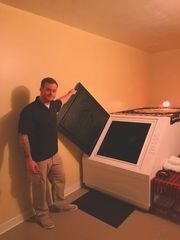 Brandon Fink, along with his family and fiancé, opened Laniakea Flotation Tanks
in Knoxville four months ago. (Photo: submitted photo)

Fink had only “floated” twice before he decided to open the first and only float center in Knoxville with his family. He estimates he is at the hundred mark now for floating.

“It was a huge leap of faith, and my family, including my fiancé and my parents, all had to be on board,” he said. The close-knit family relocated to Knoxville and opened Laniakea Flotation Tanks four months ago. Initially they thought to move from Chicago to Florida, but on the way back from Florida they stopped in Knoxville and fell in love with the area. Within days, Fink said, he had rented a house and relocated here.

“I was a personal trainer for four years. I was overworking and I needed something to detach from the world,” Fink said. “I did some research and came across flotation tanks as a mental stabilizer. I did an hour session, and it completely changed my life.”

“The flotation tank takes away all external stimulation,” he said. “When I got out of the tank, it helped me focus on what I needed to focus on.”

Fink, who has a love of astronomy, came across the word “Laniakea” – the name given to the galaxy supercluster that astronomers defined in 2014. Laniakea is Hawaiian for “immeasurable heaven.”

“When I was trying to find a name, it clicked. The zero gravity (of the flotation tank) is like floating in space or a big ocean,” Fink explained. “We thought it was fitting.

“You get to completely untether; you can’t experience that elsewhere,” Fink said. “Even in bed there are trigger and pressure points. The tank gives the effect that you are suspended in zero gravity.”

“Zero gravity” is achieved thanks to 800 pounds of magnesium sulfate. “A lot of people use that for soaking their feet or hands,” he said. “But in the tank it helps with lowering blood pressure, relieves rheumatoid arthritis, sore muscles for people that are on their feet all day or for elite athletes.” An hour in the flotation tank is equivalent to four hours of REM sleep, according to Fink. It also relieves the side effects of sleep apnea…Continue Reading…