Finding peace in ‘nothing’

Finding peace in ‘nothing’ 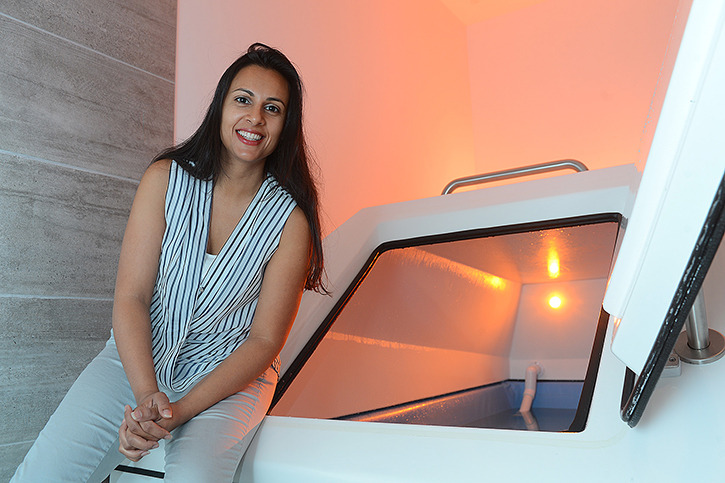 When Angie Dosanjh got the devastating news of her husband’s death, she was “completely broken.”

Tej had been her high school sweetheart, they’d been married 10 years and she was just weeks away from giving birth to their second child when police rang the doorbell of their Cloverdale home early one morning in August 2012.

“There’s no manual” for dealing with that kind of loss, Dosanjh said. “It opened up my heart in a way in which I realized how traumatic life can be.”

Overwhelmed by grief while focusing on remaining strong for her daughters, Dosanjh began re-evaluating her life, and looked to alternative paths to find her own healing.

She found it where she least expected – in ‘nothing.’

“The experience of floating is commonly referred to as experiencing nothing,” Dosanjh explained, of the sensory deprivation technique a friend suggested she try as a means of finding relief from the chaos her life had become. “The first time I floated, I couldn’t tell if my eyes were open or closed.”

It involves floating au naturel in a sound- and light-proof tank of Epsom-salt-saturated, body-temperature water – approximately 1,000 pounds of salt in 1,000 litres of water – for 90 minutes.

Developed about 65 years ago by Dr. John C. Lilly, who was studying the effect of reduced external stimuli on the brain, it was exactly what Dosanjh needed – a place where she could finally process her grief.

For some, the experience evokes auditory and visual hallucinations; others report heightened creativity – drawn out while engulfed in weightless silence and darkness, with no sense of time or space.

“Floating was an opportunity for me to be real for myself,” she said. “It was really profound for me.”

It’s been just over a year since Dosanjh had her first float, and she acknowledges that circumstances which drove her to try it were not typical.

But she’s convinced there’s a place for floating in everyone’s life – whether it’s for stress relief, help managing chronic pain, injury recovery or simply to relax. (She noted her centre is the first this side of the Fraser to offer float tanks; she also offers dry-salt therapy, for respiratory and skin ailments, as well as massage.)

Next month will mark the third anniversary of her husband’s death, and while her business may have evolved from the tragedy, Dosanjh said it is not centred on it.

“Losing him resulted in me going off on a different path,” she said. “As tragic as it is, it’s not going to define me, but it’s going to create meaning for me… turn my scars into sacred scars.

“I really feel like I want this to be a place of healing and rest for people.”