Disconnect in a DreamPod: a flotation tank adventure in Hong Kong

Disconnect in a DreamPod: a flotation tank adventure in Hong Kong

Blog » Disconnect in a DreamPod: a flotation tank adventure in Hong Kong
Posted on August 29, 2015
Tweet 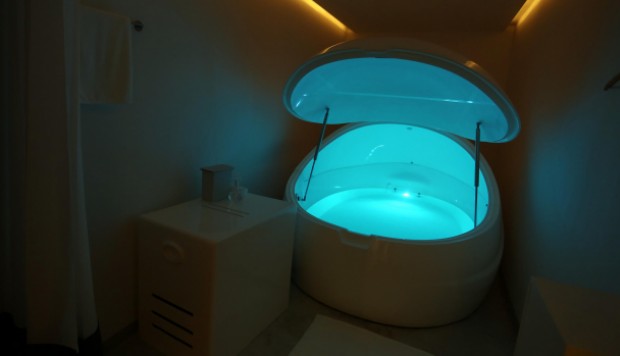 SAT AUG 29,2015
The city’s first ‘sensory deprivation centre’ is apparently a great way to reset the body clock and soothe back and neck pain. Eventually, all Kylie Knott could hear was her heartbeat and breathing

To someone with a hyper personality and a penchant for strong coffee, like me, the prospect of being shut in a “flotation tank” for an hour sounded like hell.

FloatOnHK is the city’s first “sensory deprivation centre” and it has four egg-shaped DreamPods. Each is half-filled with water containing 500kg of Epsom salt and magnesium, and kept at 34 degrees Celsius, roughly surface-skin temperature.

Leaving mobile phones at the door, you are shown to a private room, where you shower, squish in your ear plugs and hop still naked into the tank.

Inside, it is big enough to do snow angels. You’ll find a cloth and spray with which to wash salty water from your eyes, and two buttons: one calls for help, the other controls the lights: I chose rainbow mode, which alternates purple, green, blue and yellow light.

It took a while to relax. At first I bounced off the pod’s walls, then I splashed on my back; lying on the water is a weightless experience akin to floating in the Dead Sea, thanks to the high salt content.

Eventually, all I could hear was my heartbeat and breathing in synch.

When the soft Gaelic music starts, you have five minutes left. I emerged from the spaceship-esque pod like a clean alien, my skin wrinkled but super soft.

“It’s soft from the minerals,” says Canadian Dee Cheung, who set up FloatOnHK with her husband, Ciaran Hussey.

“I once floated in a pod for fours hours – it felt like five minutes,” adds Cheung, who tracks down float centres when travelling. “It’s a great way to reset the body clock.”

DreamPods, she says, are also soothing for those suffering from back and neck pain.