Climb In, Tune In: A Renaissance for Sensory Deprivation Tanks

Climb In, Tune In: A Renaissance for Sensory Deprivation Tanks

Blog » Climb In, Tune In: A Renaissance for Sensory Deprivation Tanks
Posted on October 17, 2015
Tweet 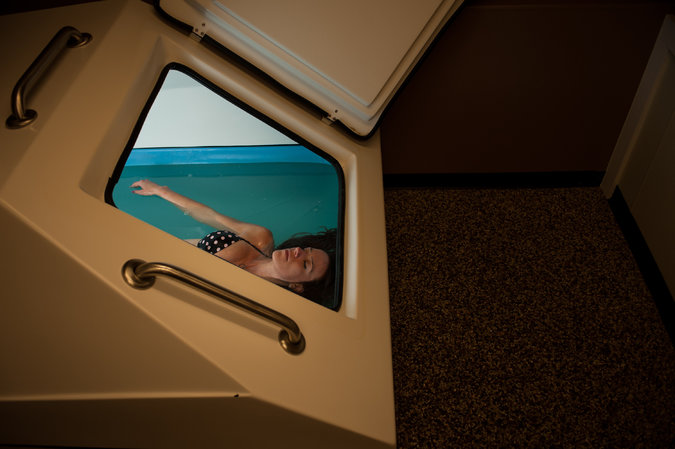 NORTHGLENN, Colo. — The capsule was small and dark and the water smelled a bit like a used gym sock, but Caleb Preuss, 28, climbed in anyway, lying supine in a bath of saline.

Once he was inside, the stabbing back pain that had dogged him for months disappeared almost immediately. “It’s something you can never experience otherwise,” he said after he climbed out, “unless maybe you’re an astronaut.”

The practice of floating in sensory deprivation chambers or float tanks — pitch-black, soundproof capsules popularized by artists in the 1970s — is enjoying a frenzied renaissance, with new float centers popping up almost weekly in cities and suburbs across the country.

In August, the fourth annual Float Conference hosted its largest audience ever. Nearly 500 enthusiasts who had traveled to Portland, Ore., heard from the chief of a new float research lab, snapped selfies with industry superstars and discussed the latest in tank marketing and technology. (Swag included salt samples and rubber duckies.) 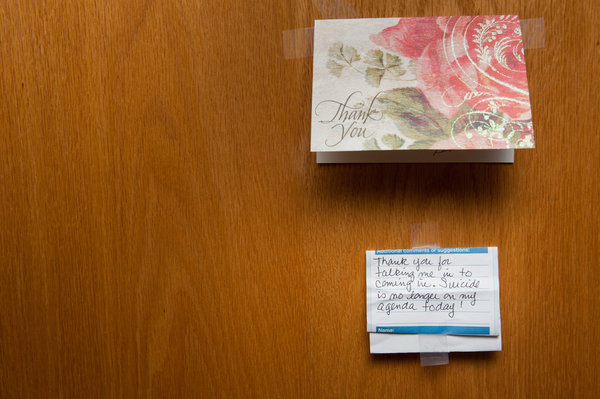 Notes that the Healing Waters owner, Lisa Lopez, has received have been posted on a wall.
One read: “Thank you for talking me into coming in. Suicide is no longer on my agenda today!”
*Credit Theo Stroomer for The New York Times

“The growth right now is extremely rapid,” said Lee Perry, 83, who, with her husband, Glenn, 74, is widely credited with developing the concept of floating in darkened pods for recreation. “We’ve been in this 40 years now. There’s been fits and starts, but nothing of this speed.”

Like yoga — which went in and out of fashion and is now back with a vengeance — this holistic pastime is drawing new converts who claim the practice can help alleviate depression, anxiety, addiction, jet lag, muscle tension, almost anything. But its return is also garnering critics, who complain of moldy facilities, exaggerated health claims and that sweaty sock stench that seems to plague the interiors of many tanks.

“It really just felt like I was lying in a sewer,” one Seattle floater, Annie D., wrote on Yelp. “Yech,” posted another, Julie M., who used a chamber in New York and wrote that she “couldn’t stand the mustiness after about 15 min so left early.”

These tanks often look like large coffins, and are filled with 10 inches of water and about 1,000 pounds of dissolved Epsom salts, a mixture that makes customers bob like corks in a wine glass. Clients lie for an hour or a night, usually naked. No one gets wrinkly; the salt turns hair and skin to butter.

An hourlong session can cost anywhere from $30 to $100, and proprietors urge customers to return as often as possible.

The practice was once billed as a path to enlightenment and even hallucination for those on the creative frontier. Developed in 1954 by a neuroscientist named John C. Lilly, float tanks took off in the 1970s, bolstered by claims that they could stretch artistic, spiritual and even athletic boundaries. 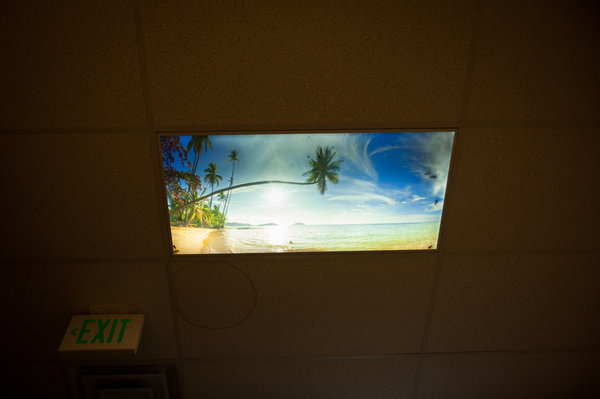 A relaxing light fixture at Healing Waters. Float tanks awaited, and the notion of them
is catching on across the country decades after their development.
*Credit Theo Stroomer for The New York Times

Dr. Lilly had used the tanks for research, but Mr. and Ms. Perry began building and selling them for commercial use. Mr. Perry described his first float as “scintillating.”

“We thought of it sort of as a spiritual project,” he said of the business. “We considered it our assignment.”

Early accounts of floating took on a poetic quality. “Blinking is an audio event,” one floater wrote in 1977 in a magazine called Coast. “Shifting my ‘vision’ in the darkness to my dominant left eye produces a rumble like a distant thunderstorm.”

Yoko Ono began to float. So did Robin Williams and many of the Dallas Cowboys. Then the AIDS crisis hit, and centers shut down amid public health fears.

Now a new generation is marketing the practice as a mainstream escape for Americans besieged by pinging devices. Groupon and Facebook are popular advertising tools. One online directory called Floatation Locations lists nearly 300 float studios in the United States, up from 85 in 2011.

There are centers in Brooklyn and Los Angeles, but also in Beavercreek, Ohio, and Manhattan, Kan.

“Sensory deprivation is something that our bodies and brains need and crave,” said Lisa Lopez, the owner of the float studio. *Credit Theo Stroomer for The New York Times

Most tanks are cleaned with the aid of a series of filters, but regulation is sporadic. A few states require float studios to follow the rules of pools or spas, said Ashkahn Jahromi, 26, a founder of Float On, a six-tank floating center in Portland and an organizer of the annual Float Conference. But mostly, he added, “it’s the Wild West.”

For those who have stuck with the industry, the renaissance has brought both good and bad. New converts often use the term “sensory deprivation tank,” while veterans like Mr. Perry call the phrase “ridiculous.”

“When I close my eyes I can hear my eyelids. I can hear my heartbeat,” he said. “We think a better term would be ‘sensory enhancement.’”

Mr. Preuss, the Colorado man with the back pain, recently visited Healing Waters Mind and Body Float Studio here in Northglenn, one of several new studios in the Denver suburbs. Inside, customers pad around in flip-flops, and the walls are dotted with handwritten letters of adoration. One note reads: “Thank you for talking me into coming in. Suicide is no longer on my agenda today!”

The center is run by Lisa Lopez, 40, a former police officer. Ms. Lopez cleans her tanks with three filters and hydrogen peroxide, as is the protocol at other float centers. The center’s website says the water is set between 93.4 and 95 degrees, with the filtering providing “sanitation beyond even that of the water that comes out of your sink, shower or bath faucets.”

Still, a locker-room odor occasionally pervades the tanks, she said, caused by oils and lotions melting off customers’ skin. “It doesn’t mean the tank is dirty,” she said.

Clients include adults with multiple sclerosis and post-traumatic stress disorder. Her youngest floater is 7 years old; her largest is 6-foot-9 and 380 pounds.

“Sensory deprivation is something that our bodies and brains need and crave,” said Ms. Lopez, who explained that she planned to expand from three tanks to six.

via: THE NEW YORK TIMES