Burnaby goes with the float

Burnaby goes with the float

Blog » Burnaby goes with the float
Posted on September 21, 2015
Tweet 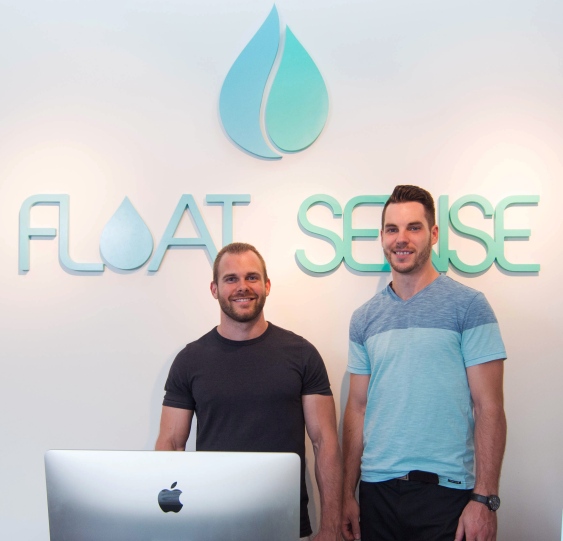 Randy Nyholt, left, and Craig MacGregor are the co-founders of Float Sense, located in Burlington Square behind Oyama Restaurant. The pair decided to start the business after having a “pretty profound” experience a couple years ago. Photograph By Contributed

Business has been picking up for one of Burnaby’s newly-established floating services.

Craig MacGregor and Randy Nyholt opened the doors to Float Sense – located at 6540 Burlington Ave. – on Canada Day. Since then, the entrepreneurs say they average about eight to 10 clients a day, about double compared to July’s numbers.

“It’s definitely more than we anticipated,” MacGregor told the NOW, adding renovations are underway for a possible fourth tank to compliment the three already on site.

Floatation – where subjects get inside a soundproof tank to float in salt water at skin temperature – was first used in the 1950s to test the effects of sensory deprivation. Today, many use the therapy for relaxation, meditation and for chronic pain and illnesses like anxiety and fibromyalgia, MacGregor said.

He and his business partner (who also happens to be a childhood friend) first heard about floatation a couple years ago after listening to a Joe Rogan podcast. The pair, who were living in Edmonton at the time and working in construction and personal training, decided to try it out.

“It was pretty profound,” MacGregor said. “For me, it let me put my ego to rest and really take a deep look inwards at myself, very powerful and relaxing.”

Other benefits, he added, included a shorter recovery time between his workouts.

“It didn’t take long after our first couple of experiences where we were like, ‘Hey, let’s put together some kind of business plan, so we can share this practice with everyone.’ We decided Burnaby was the right place. I knew the area pretty well, and I knew the general population was a little more open-minded to that type of thing,” MacGregor explained.

Many first-time clients, however, are skeptical, he noted.

“They think, ‘Oh, why can’t I do this at home, lay in the bathtub and fill it up with salts?’ To be honest, those people are the ones who have those life-changing experiences.”

Battling skepticism, and claustrophobia even, can be achieved by explaining the floating process, MacGregor said.

“We don’t want to tell them what will happen because it’s very versatile. Every experience is different. We want them to give them a canvas to paint their own way.”

MacGregor likened flotation to yoga, where those who practice it must commit to a regular schedule to see results.

“Lots of artists go in there to get creative,” he said. “When you limit the sensory input, your brain has not much left to do other than to be guided into a deep meditative calm.”

Float Sense’s three tanks are heated to 93.5 degrees Fahrenheit and are filled with 10 inches of water that contains 800 pounds of dissolved Epsom salt. A session costs around $70, but there is a $39 introductory float being offered at the moment.