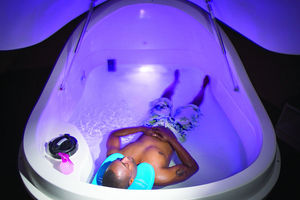 Aqua Therapy Clinics, in Gilbert, is taking a new and innovative approach in terms of physical therapy by introducing flotation therapy as a viable and medical option.

Introducing Flotation Therapy as a viable health option rather than a spa treatment, which in most cases it’s used for, is what both Chief Executive Officer David Grywul and Chief Operating Officer Mark Ector envisioned back in 2014.

Patients who visit Aqua Therapy are given an assessment of what they’re needs are to complete physical therapy.
They meet with the clinic’s physical therapist, Troy Babel, who devises a road map toward a successful recovery.
“We have patients who have acute or chronic injuries, or those who have pain from sitting down in front of a computer all day,” Babel said. “We also see people who have general aches and pains that they don’t want to deal with anymore, and want to be able to live their life with less pain.”

“Sometimes patients will have physical therapy and then after that they will float for about an hour,” Ector said. “During that time is where their body has the opportunity to feel weightlessness, and gives the brain the opportunity to spend 80 percent of its focus on the body itself.”

Patients float inside the chamber tanks in complete darkness, and are not allowed to use any mobile devices during the sessions.

Flotation therapy is designed to relax your body to its full potential, while allowing it to heal in a more “natural” way. According to Aqua Therapy Clinics, taking minor breaks from gravity causes fascinating and significant changes in the braining, which causes endorphins to be released. Endorphins are powerful, natural pain relievers and mood enhancers for the human body that promote healing benefits.

Such benefits can consist of a decrease in anxiety, stress, nervousness and depression.
Those who are claustrophobic can ask to have the chamber tank’s door open while floating in the dark, and have the option to have some form of light and light music in the background.

Patients are advised to count their breaths during the sessions in efforts to relax their mind and body.
Lisa Stillwell, a patient at Aqua Therapy, said the flotation sessions have done wonders for her back problems and for her brother-in-law, who suffers from multiple sclerosis.

“My brother-in-law hasn’t felt this good in years and it’s because of the type of physical therapy he gets at Aqua Therapy,” she said.

Being fairly new to Gilbert, Aqua Therapy is still trying to get their name out to the community and working with insurance agencies in order for patients to use it as a form of physical therapy, Ector said.

For additional information about Aqua Therapy Clinics or to schedule an evaluation, call 480-773-7766.