A SENSE OF WELL-BEING Floating in Evesham, Bristol offers peace and serenity

A SENSE OF WELL-BEING Floating in Evesham, Bristol offers peace and serenity 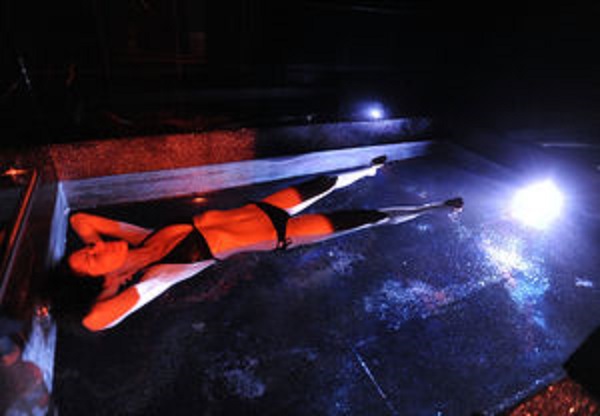 Matt Sees, a competitive weightlifter, makes an effort to submerge himself in different training strategies that will give him a competitive edge. When a co-worker recommended floatation therapy, Sees took the plunge.

Since January, Sees, 27, has been a regular at Float, a sensory deprivation flotation center in South Jersey. The athlete said floating in a 9-foot-by-6-foot fiberglass tank filled with 1,000 pounds of Epsom salt and 93-degree water has improved his sleep, enhanced his skeletal system, and boosted his mental acuity, leading him to have peak performances.

“After floating, I feel fresh, like I took a five-day nap,” said the Camden County resident recently, while sitting in Float’s serene lobby.

Tom Bazis opened Float in a strip mall in Evesham last December, after a decade of working in commercial finance. Other flotation facilities are popping up, including the Float Spa on Mansion Street in Bristol.

Bazis said he has always been fascinated with the idea of weightlessness and the synchronization of brain waves. Proponents say floating releases theta waves that can be found during meditation, daydreaming, and right before waking up.

He first learned about floating a few years ago, while listening to comedian/actor Joe Rogan, who has extolled floating’s virtues during his podcasts. After giving it a try in 2013 during a business trip to California, Bazis said he was utterly transformed.

“I’d never had an opportunity to review my choices and daily behavior. It was a complete awakening,” said Bazis, 32. He returned home, gave up alcohol and cigarettes, and became a vegetarian.

“The experience gives your senses a rest,” said Amy Severin, 39, who is Float’s other owner and Bazis’ life partner.

Studies internationally have shown that floating lowers blood pressure, reduces anxiety and stress, and improves creativity in musicians. Moreover, a 2004 study conducted at the University of Birmingham in England revealed that magnesium, a mineral found in Epsom salt, and which plays a vital role in preventing acute diseases, is absorbed through the skin during soaks.

Around the country, floating is enjoying a rebirth in major cities, after evaporating from favor for years. There are two in Northeast Philadelphia, as well as Bristol’s Float Spa.

Flotation tanks, or isolation tanks, were invented in 1954 by neuroscientist John C. Lilly, who experimented with the mind’s response to sensory deprivation.

By the mid-1980s, the AIDS scare caused worries about sharing public water in spas and the like. Facilities suffered, and many closed as a result. Bazis’ floating chambers are cleaned, using a combination of hydrogen peroxide, ultraviolet rays and an advanced filtration system.

Unlike some centers that offer only coffinlike tanks, Bazis offers three themed walk-in rooms: water world, the grotto and the galaxy, all bedecked with modern floating basins, showers with toiletries, tiled floors and avant-garde illumination, designed by Bazis, who in another life studied theatrical lighting.

After showering, participants sink into one of the floating tanks and close the door. Controls turn lights and music on or off. Lie back… relax… and float.

Soft music indicates when time is up. After showering again and dressing, guests are escorted to a lounge to savor a cup of tea, as they gather their bearings.

Sessions are 60 or 90 minutes, and prices range from $49 to $95. Specials and packages are available.

Since opening, Bazis said business at Float has been rising. Repeat customers, who include athletes, mothers and executives, account for 25 to 35 percent of his base.

“Our youngest client to date has been 12. And our oldest has been an 82-year-old woman, who came in leaning on her walker,” he said. “When she left, she had tears in her eyes. She told me she felt that good.”