A Buoyant Boost for Frustrated Buddahs: The Float Tank

A Buoyant Boost for Frustrated Buddahs: The Float Tank 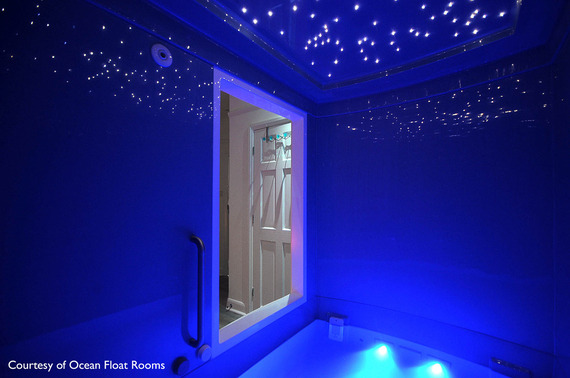 My first real memory of my father was floating in the Atlantic Ocean in Hollywood, Florida. I must have been 4 or 5 at the time. He was a master floater. He perfected the hands behind the head float and the ankle grabbing from behind his back float. He could float for hours, gently bobbing up and down with the subtle undulation of the soft, warm South Florida ocean. I also remember pissing him off as I splashed, dove under and swam all around him, trying to get his attention. So it made sense that instead of scolding me for being the 5-year-old guppy that I was, his first instinct was to teach me how to float with him. And so we floated together — drifting wherever the mild tide took us. I would look up at the puffy clouds and find animal shapes and watch them morph and mutate into childhood, imaginary, unnamed new animals. He never opened his eyes and played those games though. He would just float, lost in some far away state — somewhere I wasn’t, somewhere nobody was.

I am now 49 and have been living in California since 1985, and for those of us who grew up cradled in the bath-like waters of South Florida, you all know that the Pacific is not our friend. I can count on one hand the amount of times I actually submerged my entire bathing clad body in the Pacific Ocean. Sure, I have gone in up to thighs and even splashed around a tad, but submerge? Na ah. And so, when I came across an advertisement for a float tank experience that claimed “it’s likely to be the most relaxing thing you’ve ever experienced” I was more than a little intrigued, although skeptical. It claimed to treat everything from stress, anxiety, depression to migraines, chronic pain, fibromyalgia, and mental disorders. All right Floatman, I’ve been to the best spas in the world, I know from relaxation, bring it on! I made my first appointment at Float North County in Solana Beach.

Before I describe to you my experience in the tank, a few things are important to know. First, my husband, who was an army interrogator, quietly pointed out to me that Floatation tanks, also knows as sensory deprivation tanks or isolation tanks are used as a form of torture. I shot back, “Okay, maybe, but they are also known as REST, or Restricted Environmental Stimulation THERAPY.” I read that somewhere and just said it to sound smart. Which is an important thing to do from time to time when you are married to a Ph.D. biochemist/interrogator. Second, I cannot silence my mind. Ever. It simply chatters away on its own terms without any permission from me. I tried guided meditation a few times and I think I made it to .008 of a second before the grocery list popped into my head. I also don’t do yoga, am not a vegan and the thought of silent meditation retreats could be my version of hell. But that’s not to say I don’t NEED to still my mind. Oh, I do. Trust me, I do.

So off I went to visit the Floatman and check out what was boasted as “floating in a tank is like relaxing in outer space” — cause like yeah, that’s a thing, right?

I was greeted by the owner, Glenn. He explained the whole process (no, you don’t need to wear a bathing suit — in fact, they discourage it. Sweet!). Can I drown? Will I shrivel up like a prune? If I die how will he know? He then led me into a fairly large, private room with a shower, towels, shampoo and toiletries. Not unlike a spa environment. Cool, I’m in my element! He then showed me the door to the tank and opened it. A shot of warm, humid air hit me like a Florida storm in June. It was beautiful. A lovely, huge blue tub was inviting. All I had to do was get nakey, shower, and step in. The soothing music and the sparkly lights on the ceiling were a nice effect. Armed with the knowledge of where the light switch was, where the door handle was, and knowing there was a bright, red button that he failed to mention in the instructions, I lowered myself in. And I floated. Effortlessly. There were over 800 pounds of Epsom salt in this “pool.” It took zero effort to float. In fact, it took more effort to move about! The soothing music stopped about 5 minutes in, and then I switched the light off. Complete blackness. No sound. No body movement. No Thing. For the first 10 minutes or so I was aware of my beating heart and my breath. That’s it. There was nothing else. I slowly put my hands behind my neck and waited.

I tried to figure out where my body ended and where the water and air started. I couldn’t. The temperature of the air and of the water were the exact temp of the body. I could not fathom where “the me” was in this tank. It was like I was everywhere and nowhere at the same time. I focused on my breath and my mind went blank. Did I fall asleep? I don’t know. I can say that I went somewhere else. I went into a nowhere place. It was a completely new sensation for me. My brain was gone in a really good, good way.

The end of the 60 minute sesh wakes you out of your netherworld state by playing soft music. The music started and I was pissed! Really? Who screwed up and played the music 20 minutes into my nirvana? But no, it was the end of the hour-long float time. Really? It was over. I slowly unfurled my hands, forced my booty to sit down straight in the pool, turned the blue light on and pried myself away from the water.

Showered. Clean. I ventured out to the lobby. I looked at Glenn and just said, “Fucking profound, dude.” He then said, “just write that down in the Floating Journal.” I did.

I have since floated many times, and every time I float I go deeper and deeper into myself or maybe it’s away from myself. Turns out it’s scientifically suggested that loss of sensory input results in relaxation of the body. According to a 1999 research study, during floatation there is an increase in the theta waves in our brain. Theta waves have been shown in other studies to be activated by meditation. I’m meditating, folks! I’m really doing it and it’s effortless and there are no oms involved! A 2001 study found spending time in the floatation tank showed a strong ability to reduce severe pain, increase optimism, and decrease anxiety and depression. In addition, study participants fell asleep easier following floatation tank treatment and experienced a higher quality of sleep. Am I experiencing these things? Yes I am. I so am! (And so, by the way, is my skeptico-chemist interrogator husband.) I’m no Buddha, but I am incredibly grateful to have found a mind stillness that has been elusive to me for so long. It’s changed everything.

Finally, Dad, I know you are floating in heaven. You never explained to me why you floated like you did, and now I finally know where you were or weren’t when you drifted in the ocean. You made the world disappear, quieted the incessant noise in your mind, and found your nowhereness. I was just too damn busy for the past 40 years making cloud animals and creating stories in my head to allow myself to simply close my eyes and let it all go. I can now feel your presence when I float, and that’s been the best benefit of all.