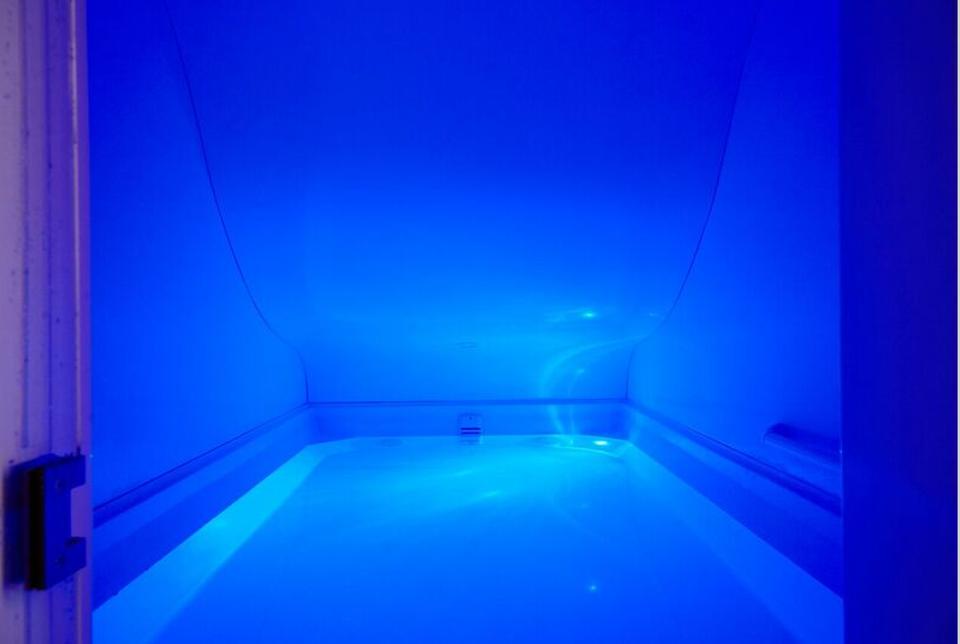 As Tom Brady prepares to face the Atlanta Falcons in the Super Bowl, one part of his self-care routine may include floating in total darkness and silence in his own private floatation tank. Brady supposedly keeps one in his Boston home. Unsurprisingly, the superstar quarterback famous for winning not just on the football field, but at life in general, is at the forefront of the latest health trend.

R.E.S.T or Restricted Environmental Stimulation Therapy, sensory deprivation therapy, or what’s currently being called floatation therapy has been touted as a panacea for a myriad of physical and mental issues including muscle soreness, sports injuries, anxiety, depression, sleep disorders, PTSD and more. Proponents claim it is the ultimate mood regulator encouraging a deep meditative state that decreases cortisol levels and encourages the release of endorphins.

Once only popular among hippies and artists-John Lennon apparently kicked his heroin habit with 1.5 hour floats, the practice has been gaining respect in broader circles. In the past few years with wellness becoming more of a mainstream priority, the number of float centers has increased to meet demand. One-year old center Floating Lotus in midtown Manhattan hosts 10 to 12 floats daily, about 70 floats a week.

Eager to reap the many supposed benefits, I tried the center’s unique Accu-Float therapy, just 2 months after giving birth. If ever there’s a body in need of self-care, it’s a body that’s just grown a set of twins. Here are the 8 things I learned.

Find a suite not a pod.

For those afraid of the pods reminiscent of a water coffin, Floating Lotus offers a suite complete with a changing area, shower and a 9 feet by 6 feet tub. There is total privacy, which is something you’ll appreciate given that you’re naked.

I’m much more of a dance cardio devotee than a yogi type, however this experience left me no choice but to relax, providing a shortcut to a meditative state. I first took a warm shower to ensure utmost cleanliness and then submerged myself in water heated to the temperature of my skin which is about 93.5 degrees. I fidgeted for a good 15 minutes, but then settled. While my mind did not become a total blank, I did have stretches of blissful nothingness, something I have not experienced during my attempts at meditation alone.

Owners of one center in Oregan, Float On, have been known to discount packages to artists or trade sessions in exchange for a piece of floatation-inspired art. Floating is said to boost concentration and problem-solving skills. During my own session, I became fixated on finding the perfect headline for a story and was able to hit upon just the right phrasing. In a time when we are bombarded with endless forms of distraction, this experience forces you to focus.

Much of the evidence is still anecdotal but something positive does happen to the brain during floats. According to one Time magazine article, an fMRi study conducted by Dr. Justin Feinstein, director of the Float Clinic and Research Center at the Laureate Institute for Brain Research in Tulsa, Oklahoma, 90 minute float sessions act on the brain by shutting down the amygdala-the area of the brain that triggers the fight-or-flight response. This reduction in anxiety is similar to the effects of prescription drug Atavin. After my one float, I felt buzzy and a bit euphoric. My mood definitely improved. This feeling increases the more you float. Says one of the partners of Floating Lotus, Joel Granik,

“Recently I floated for a month straight everyday and it had profound effects. One benefit that really surprised me was that I had flashbacks to my floating experience throughout the day and I remembered what it’s like to be in that state. It relaxed me, giving me an instant sensation of peace almost immediately.”

Magnesium sulfate is a cure-all

Most float tanks are 10% epsom salts rendering the water twice as buoyant as the Dead Sea, which allows the body to float and provides amazing anti-inflammatory benefits. I had a 2.5-month-old c-section scar that was healed, but still quite puffy along its borders; I saw a reduction in puffiness after one float. My skin was also silky smooth. Inflammation in the body is caused by a lack in magnesium which floating replenishes.